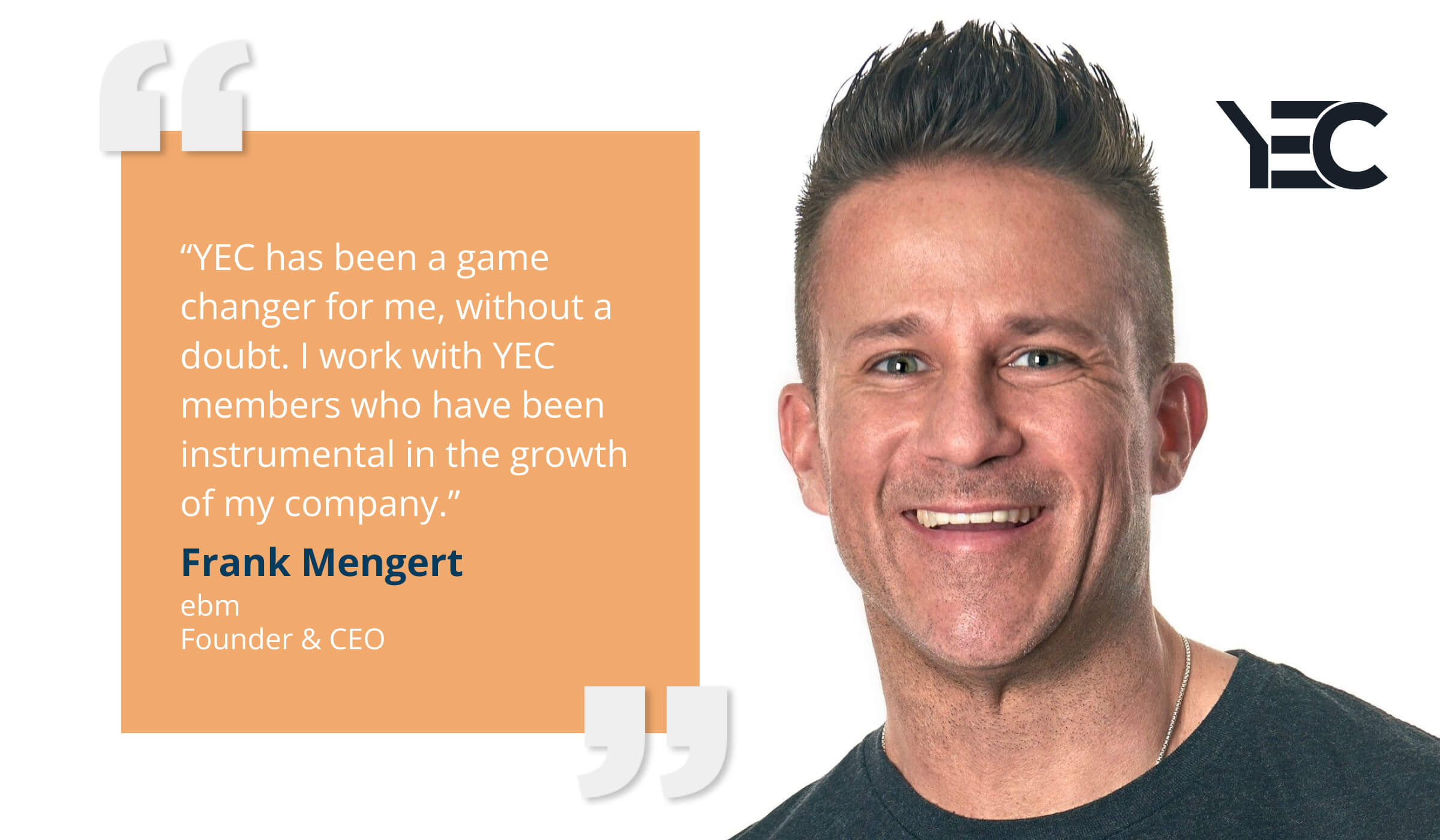 For Frank Mengert, the road to entrepreneurship was paved by necessity. As a college student, Frank worked at a local paper mill that offered tuition reimbursement and a path to a job in management. “My goal was to move up to the front office with all the people in suits and ties because I was in the back working on a machine,” Frank recalls. But it didn't play out that way. When the company fell on hard times, Frank was laid off. “I was devastated,” he says. “I had an apartment and a car payment and I went home and I was crushed. And then I started my first company.”

A computer science major, Frank had always enjoyed fixing computers as a hobby and turned that into a side hustle when he was in college. “When I was laid off, I probably cried for 48 hours and then I said, ‘I’m going to just do this computer thing full time,’” he remembers. He launched an IT services company, and walked a three mile stretch, going door to door to every business in his town, handing out cards and flyers. It took a few months, but he finally started getting clients. And after a couple of years, he started a new sister organization to provide security cameras and alarm systems to his customers, outsourcing that work to other vendors. And then he learned a painful lesson. The client that was generating 95% of his revenue went straight to Frank’s vendors, cutting him out entirely.

Several years later, after a successful exit from his IT services company, The Affordable Care Act was the springboard for Frank’s current company, ebm, launched in 2012. His wife’s family had been in the insurance business for years, so Frank became keenly aware of the turmoil that ACA would foment in the industry. Public exchanges posed a threat to private insurers, and Frank reckoned that companies would welcome the opportunity to compete via private exchanges where consumers could choose among non-government insurance options. He created one of the first private exchanges and worked with a vendor to white label the technology for it. And because private exchanges were such a new and complex concept, Frank spent a lot of time speaking at industry conferences, which positioned him as an expert.

"I was never part of anything and I always fumbled through stuff on my own. So the community piece [of YEC] was really big for me."

Private insurance exchanges never really took off the way Frank hoped they would, but he was able to make a quick and successful pivot with ebm. He transformed his company into an employee benefits technology firm. His clients are HR departments at large companies where employees enroll in medical, dental, and vision insurance. The visibility and expert reputation that he earned when he was speaking to the insurance industry about private exchanges helped give him credibility when ebm pivoted.

“Large companies are sometimes offering some very complex benefits packages, so we take all that and put it into a platform,” Frank says. The platform also ensures that companies are in compliance with all government regulations, including IRS rules. “We automate everything so we’re giving them time and efficiencies. We’re recession-proof because people aren’t going to stop giving employees benefits and they’re not going back to paper,” he says.

Frank has grown his company to more than 50 employees, and says that he’s often found advice and support through the YEC community. “I was never part of anything and I always fumbled through stuff on my own,” he says. “So the community piece was really big for me. YEC has been a game changer for me, without a doubt.”

Frank takes full advantage of a variety of YEC benefits. His contributions to Expert Panels, he says, “have been awesome for validation and social proof, which I think are important.” He places high value on Escape for its opportunity for “face-to-face collaboration,” and he uses the EXEC offering to save on equipment and travel. But as someone who did not grow up with entrepreneurial role models or mentors, Frank most prizes YEC’s community of peers.

As ebm became more successful, Frank says he experienced “imposter syndrome” and greatly benefited from connections with other entrepreneurs who had experienced similar emotional challenges as their companies grew. The connections also helped him take ebm to the next level. “I work with YEC members who have been instrumental in the growth of my company,” he says. He’s called upon fellow members to help him implement EOS (Entrepreneurial Operating System), for tax planning and accounting, and for business coaching. “Those people have been pivotal,” he says.