This Is Our Story

Young Entrepreneur Council is a community of the world's most passionate, driven entrepreneurs. Founded by community-building and business experts Scott Gerber and Ryan Paugh, YEC is on a mission to empower young founders.

YEC’ers make meaningful connections and support one another through the challenges and triumphs of growing impactful businesses. They have unprecedented access to concierge-level service, business resources, and media exposure via major brands.

The first seeds of YEC were sown when Scott, now a serial entrepreneur and internationally syndicated business columnist, started a business while still a college student. He says he made “every possible mistake one could make as a rookie entrepreneur.” He realized that candid advice and support from fellow Gen Y entrepreneurs who’d been there and done that could make all the difference. This led to the first iteration of Young Entrepreneur Council: an informal brain trust of like-minded peers who wanted to help one another grow.

Meanwhile, Ryan had co-founded Brazen Careerist, a career-management site for young professionals. It quickly became one of the top social networks for Gen Y, and Ryan was lauded by Mashable as “something of a cult legend in the online community-building world.”

When Scott and Ryan met, their complementary expertise led to the foundation of YEC as it exists today: an invitation-only, elite group of successful entrepreneurs who share a pay-it-forward mentality and believe that doing well and doing good are not mutually exclusive.

Scott says, “Everything we do at YEC is meant to fulfill a social need, promote free enterprise, and curate meaningful connections among our generation’s most successful entrepreneurs.” 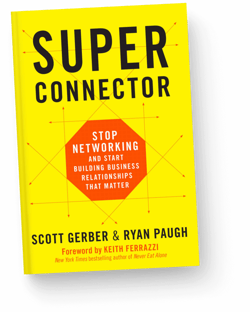 In Scott and Ryan's co-authored book, Superconnector, they reveal how in today's social media era, businesses can succeed by building valuable social capital through highly-connected communities.