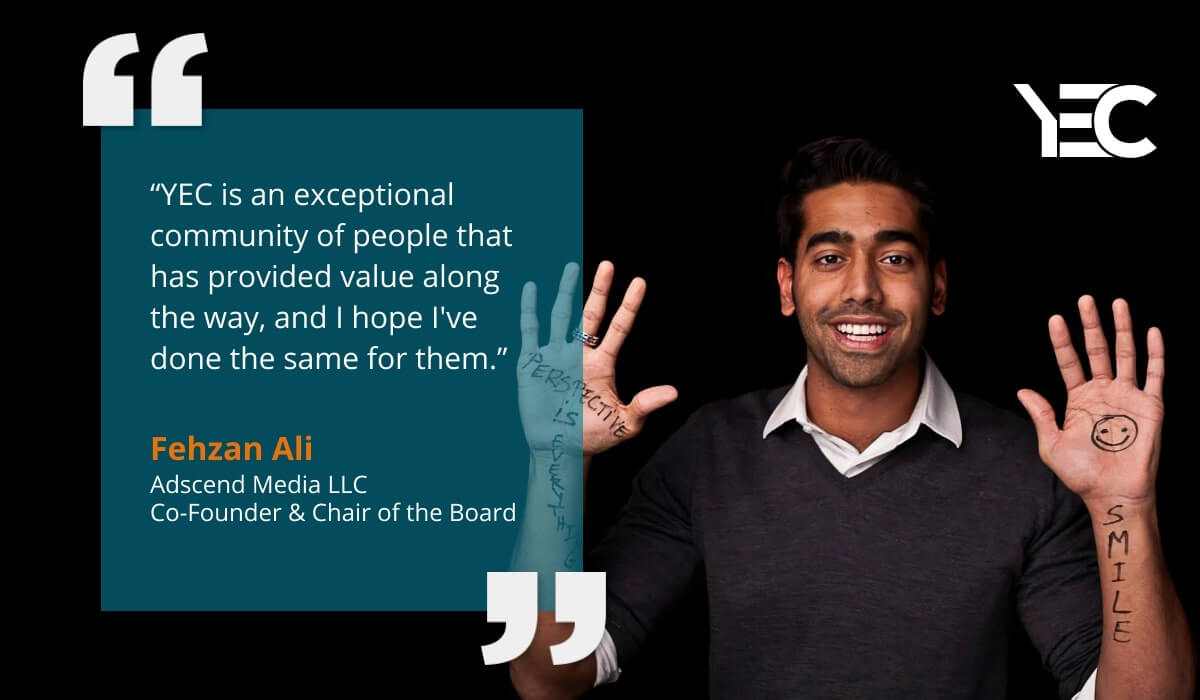 Fehzan Ali’s first company was not a success, and he has a pretty clear idea of why it failed. “I tried to sell cell phones on the Internet,” Fehzan recalls. “The idea was that you could create demand by making it look like you had no inventory. That doesn’t work.” Also, he was only twelve years old. By the time he entered University of Texas, his second company, started in his senior year of high school, was going strong. MacroBucks was a reward program that worked with clients such as Netflix, Disney, and Blockbuster to incentivise consumers to earn gifts by participating in advertiser-sponsored offers. “That scaled really fast for us and the advertisers paid really well,” says Fehzan.

He had competitors, and one of them, Jeremy Bash, would ultimately become his business partner. “We just got to talking and realized we had really complimentary business skills,” says Fehzan. “I did a really good job at driving the business forward and he did a really good job at innovating and bringing new technology into the fold.” They decided to join forces in 2009 and started Adscend Media, a performance-based affiliate network. What set them apart from competitors is that Bash did all the programming himself; it was far more common for affiliate networks to outsource their technology needs. As it turned out, having full control over their technology would give them a significant competitive advantage; they were able to iterate and innovate quickly.

After just a few months, the partners came up with a new concept called content locking. A piece of code was attached to content, such as a song, which customers could pay for by completing an offer from an advertiser. “We work with quite a few artists who want to monetize their content,” says Fehzan. A typical advertiser would be, say, an auto insurance company that wanted to generate leads, or a new app looking for more downloads. “This is something we came up with on our own,” says Fehzen. “And there weren’t many competitors that came out after that, so for a long time, it was kind of our market. From June 2009 to April 2010 we were on a crazy growth path.”

“Honestly, YEC has been incredible. It’s like having a crowdsource mentor. You get the smartest people getting back to you about whatever you may be having a hard time with.”

Over the next few years, Fehzan and Jeremy focused on growing their team and driving revenue. But by 2014, Fehzan knew that he needed to reinvent the business again. Jeremy left Adscend, Fehzan brought on a CTO to fill the gap, and the team began taking stock of its technology capabilities and strategizing about how to leverage them. “We had a lot of relationships and we also had a skill set that was unique, that's really focused around incentives and understanding people,” says Fehzan. The company began working with established brands, such as mobile game companies, to create offerwalls, which reward users with points in the game in exchange for viewing an ad. And a year later, they would introduce a video platform called EngageMe.tv, which featured advertiser-sponsored content using their own offerwall. “That was a crazy hit,” recalls Fehzan. “It took us about a year to hit an eight-figure run rate.”

Today, the company still has its offerwall and video platforms but has also added its own rewards program “as a way to take control of our own destiny a bit more,” says Fehzan. It’s a platform where users earn Bitcoin or gift cards for participating in market research surveys. “Each platform helps the next one grow,” says Fehzan. “We know where we want to be and where we belong. We’ve refined our technology so much that we’ve found ourselves in a very unique position today.”

With Adscend well-positioned for growth, Fehzan has recently decided that it’s time to move on. He hired a CEO earlier this year and has stepped away from day-to-day operations, although he remains chair of the board. After spending more than 15 years in the digital advertising industry, he thinks he has some insight into the future of technology. “User privacy is huge,” he says. “I think blockchain is a really big application to protect user privacy, while still allowing the internet to function as it is.” He plans to launch a new company in the blockchain space in early 2022.

Fehzan is a long-time YEC member who has relied upon the community for advice and support as he grew Adscend. “Honestly, YEC has been incredible. It’s like having a crowdsource mentor,” he says. “You get the smartest people getting back to you about whatever you may be having a hard time with.” Fehzan says he’s tapped YEC for advice on profit sharing plans, hiring staff, and rebuilding a sales program, among other issues. He even sought advice when he was thinking about selling Adscend, and has recently started working with fellow YEC’er Ben Berman, an EOS (Entrepreneurial Operating System) consultant. “YEC is an exceptional community of people that has provided value along the way, and I hope I've done the same for them,” Fehzan says.