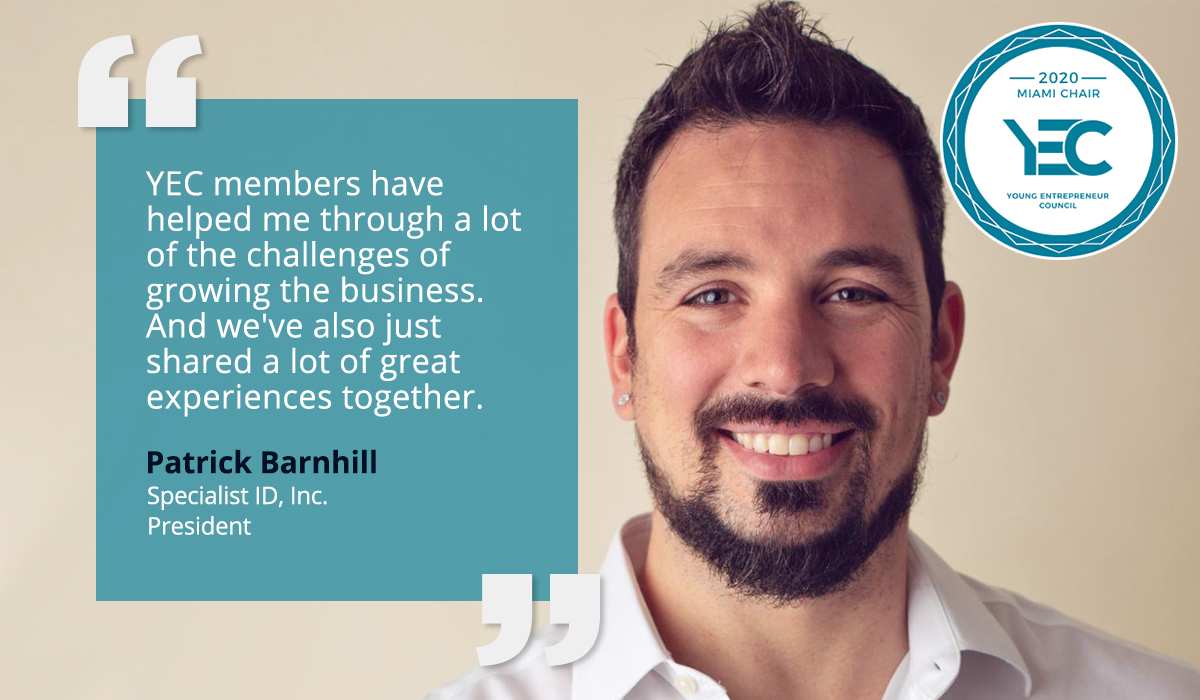 It’s hard to imagine anyone who personifies the value of YEC’s network and connections more than Patrick Barnhill, president of Specialist ID. Not only did fellow YEC members prove invaluable to him when he was growing his company, but he met his wife, Shama Hyder, at YEC Escape. “It’s been life-changing,” he says of YEC. “I’d never really been around other business owners, and then I found YEC and it was a next-level peer group. It’s filled with people loving life, doing what they love, and just living the dream.” Patrick had been attending YEC Escape regularly and then, in 2019, he met Shama at the event and went snowmobiling with her. “We got married a year later and now we have a little YEC baby,” he says.

As YEC’s Miami chair, he hopes to eventually host events at his home with Shama, who is YEC’s Marketing and PR Agency chair. “I'm optimistic that we’ll get back to some kind of business as usual, and we can get back to doing in-person events,” he says. “For now we'll meet up online and stay in touch and help each other work through whatever we're dealing with, good or bad.”

Patrick started Specialty ID, a distributor of photo ID badge accessories, with his brother in 2001, when he was just 21 years old. His first experience in the industry was through working with a friend’s father when he was in high school in Portland. When he moved to Miami for college, he decided to start his own company. “I started my business with no money by selling a few badge holders here and there on eBay,” he recalls. He lost money every month for six years, but supported himself with a lucrative bartending gig in South Beach. “I was able to just keep throwing spaghetti against the wall until we found something that worked. And then we hit that stride and it started growing fast,” he says.

“It’s been life-changing,” he says of YEC. “I’d never really been around other business owners, and then I found YEC and it was a next-level peer group. It’s filled with people loving life, doing what they love, and just living the dream.”

Patrick says he found inspiration in the Jim Collins book Good to Great, and that his business began to take flight when he stopped offering services that required technical support and installation, and instead focused solely on selling badge accessories online. “We set out many years ago to become the leading brand of ID badge holders and badge accessories,” he says. “We decided to stop everything else we were trying to do and become the best in the world at badge holders and to fall in love with our customers, not the product.”

Amazon, Patrick says, played a huge part in Specialty ID’s growth. “I think we pretty much created the category on Amazon,” he says. Because his company sells a commodity, Patrick differentiates his products through brand identity and customer service. Customers fall into two categories: individuals who buy small quantities of badges because they want a more attractive case for their company badge; and large organizations such as the military, federal government agencies, schools, and hospitals.

COVID-19 may have a short-term negative impact on Speciality ID, Patrick says. August is typically a big month for the company, as schools purchase ID badges for incoming students. But a return to the classroom is uncertain at the moment. “That business has gone away right now, but it will probably come back and when it does, I think we’re going to see more types of identification and restrictions,” he says.

Patrick is a long-time member of YEC and still remembers the first time he attended Escape. At the time, he was embroiled in a trademark infringement lawsuit, which was causing him a great deal of stress. At Escape, he met Will and Laura Land, who had first hand knowledge of legal issues involving IP. “They got us on the right track, got us the right lawyer; it just relieved so much of that stress,” says Patrick. “YEC members have helped me through a lot of the challenges of growing the business. And we've also just shared a lot of great experiences together.”