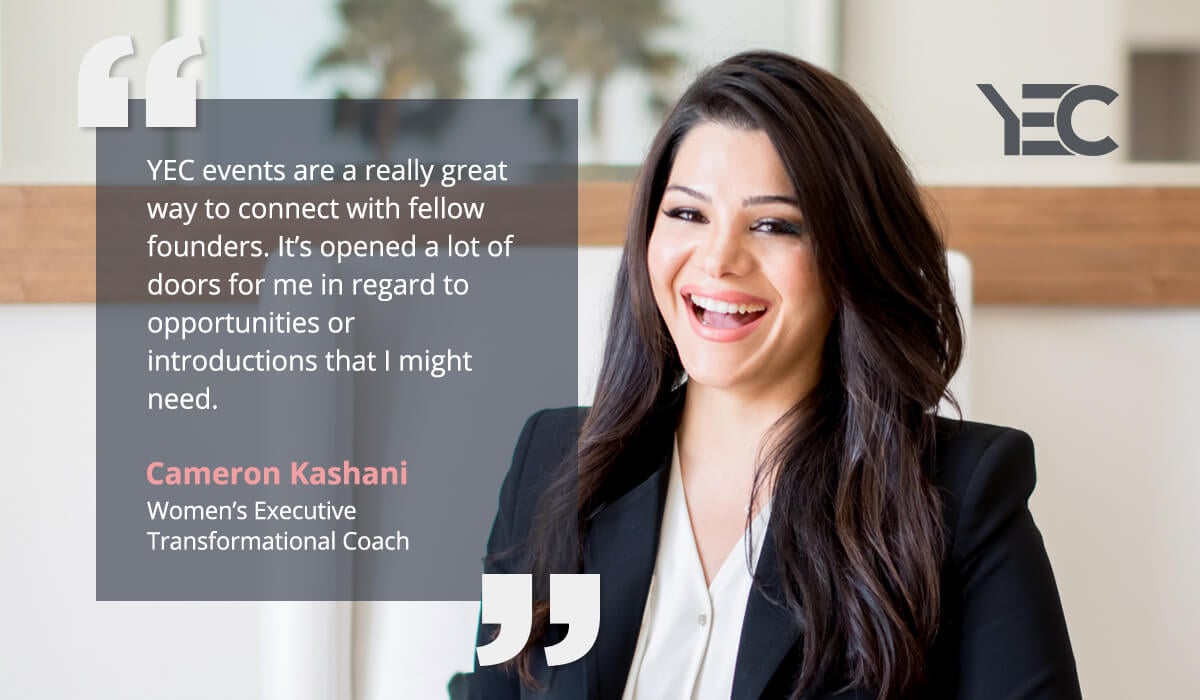 As a founder of three companies, serial entrepreneur Cam Kashani has accumulated a wealth of knowledge that she now shares with her coaching clients, most of whom are female founders and executives. But she didn’t come by any of it easily. “It was like I was forced into a place where scarcity spawns creativity,” she says.

Cam started her first company, a document delivery portal for the healthcare industry, in 2008, right around the time of the Great Recession. She and her co-founder (who was then her husband) invested $200,000 of their own money and lost it all. “It as a brutal failure,” she says. “The economy was really bad, I couldn’t find a job, and I was getting my MBA.”

While exploring another business idea in San Francisco, Cam and her partner spent time at a co-working office, fell in love with the idea, and decided to bring the concept home to Los Angeles where, at the time, there was little or no ecosystem for entrepreneurs. So in 2009, she and her partner launched CoLoft, the first co-working space in LA. “We didn’t know what we were doing, but we had a better idea than we did with our previous company,” she says. “We learned the hard way and CoLoft ended up becoming ground zero for the LA technology ecosystem.”  Companies such as Uber, Instacart, and ZipRecruiter were among the company’s 1800 alumni, earning Cam the nickname “Godmother of Silicon Beach.” It was at CoLoft that Cam says she first realized the true value of community, a discovery that eventually led to her membership in YEC.

But while the company was successful, Cam’s marriage was not. And when she and her husband split, complications in the divorce process compelled her to leave the company. “In one breath I lost my marriage and my company and I had no idea who I was,” she recalls. “I had my twin boys who were one and a half at the time and it was really brutal. It was definitely the lowest point in my life.”

At YEC events, Cam says, she always sees some familiar faces but also enjoys meeting new members. And when she travels, she typically reaches out to the YEC community. “It’s such a cool and easy way to connect with people,” she says.

After spending nine months recovering from those losses, she hired a coach to help her get back on her feet and to transform her mindset. “I had a moment where I realized I didn't want this experience to define me,” she recalls. “I had the opportunity to be a victim or I had the opportunity to be empowered. And once I internally made the decision that I want to be empowered, all of a sudden resources started showing up.” The coaching helped her so much that she began thinking that she, too, might be well-suited to be a coach.

Those musings were reinforced when, in 2015, the U.S. Department of State asked her to participate in a program focused on empowering women and youth in the Middle East. She spoke to a variety of audiences in Kuwait and Bahrain. “I shared my story, and gave them tips to help them believe in themselves and build companies,” she says. “But more than anything, the biggest takeaway from that trip for me was ‘I'm going to be a coach.’ And I came back and that's what I started doing.”

Now, Cam looks back on her departure from CoLoft (which no longer exists) as “the best thing that ever happened to me, because it put me on this path to transformation.” She now gets great satisfaction from working with women to help them overcome limiting beliefs and barriers that are preventing them from being successful. “I had a client who really had no idea she could start her own business,” Cam recalls. “She wanted to, but she had so much self-doubt. In a three-month period, which is the length of time of my engagements, she went from not believing in herself to not only starting her own company, but she also raised money and she got her first customers.”

Cam says she values YEC events as a “really great way to connect with fellow founders. It’s opened a lot of doors for me in regard to opportunities or introductions that I might need. At the LA events, I’ve gotten introductions to clients.” At YEC events, Cam says, she always sees some familiar faces but also enjoys meeting new members. And when she travels, she typically reaches out to the YEC community. “It’s such a cool and easy way to connect with people,” she says.