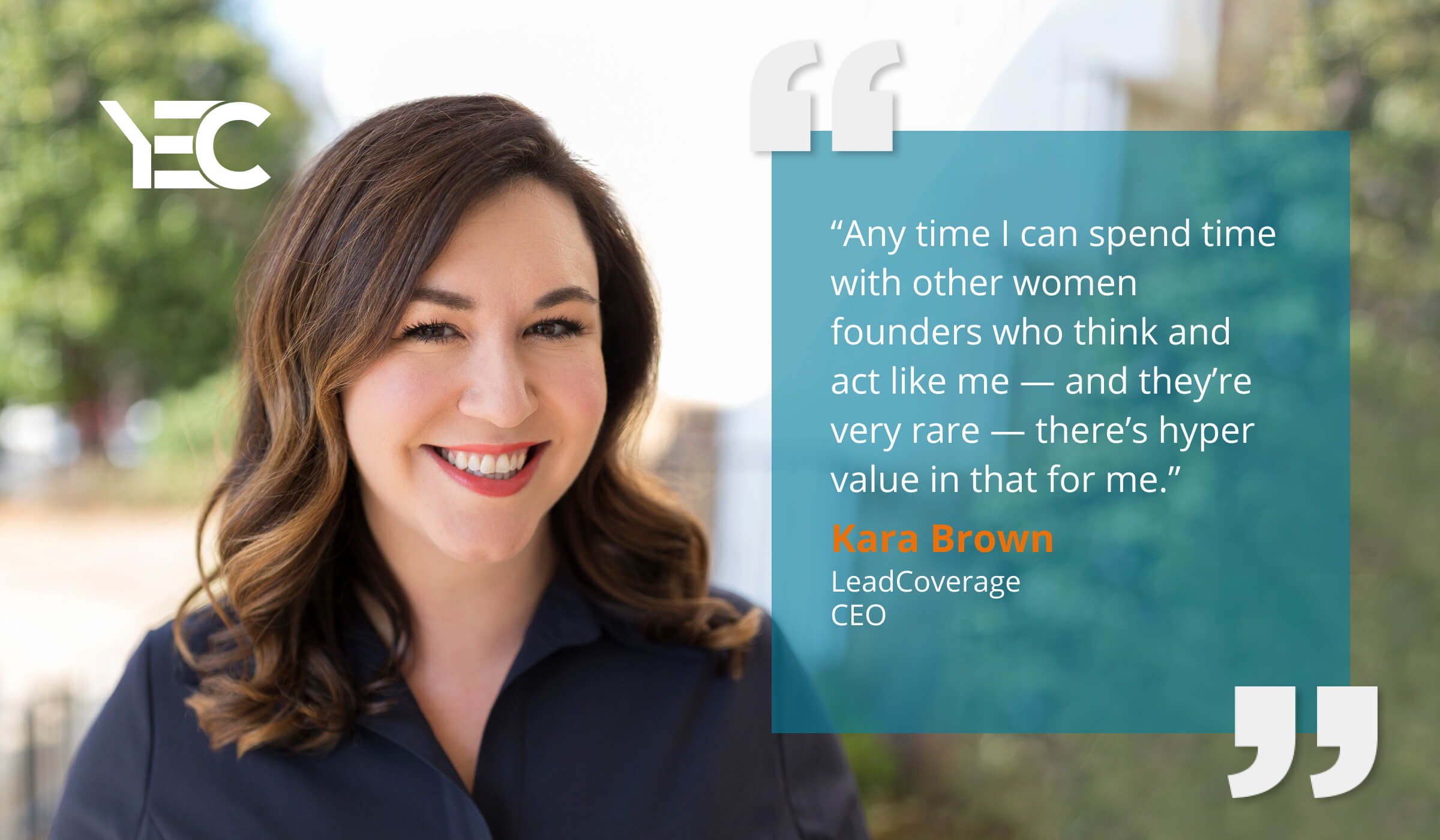 Kara Brown has her eyes on a very specific prize: she’s aiming to be counted among the almost infinitesimal percentage of female founders with companies in excess of $10 million in revenue. Given the success she’s already experienced with LeadCoverage, she thinks she’s well on her way.

“I never thought I was going to be an entrepreneur,” says Kara. “I had always worked for entrepreneurs and they were always old white men and I just assumed I’d keep working for them, or men like them, for most of my career.” That career was in the supply chain industry. As director of marketing and investor relations for Echo Global Logistics, a transportation, logistics, and storage company, Kara helped take the company public at age 26. She stayed in the corporate world for a few more years before taking a break to start a family. During that time, she ran her own mar/com practice from home before moving to Atlanta to take another corporate job.

But less than a year after she had started the job, Kara’s husband made a wise observation: she seemed happiest and most fulfilled when she was working for herself. At around the same time, she discovered that only 2% of female founders make more than $1 million in revenue. That didn’t seem like such a heavy lift to Kara, so she started networking within her industry and found that there was considerable excitement when people learned that she was back on the market. “I started having coffees around Atlanta and closed about $400,000 in work in three months,” she says. In ten months, she would post $1 million in revenue.

LeadCoverage specializes in analyst relations and public relations and “all things lead gen” for the supply chain industry. “It’s a $2 trillion space,” Kara says. “Everything you touch, eat, or wear has been on a truck and those are my clients — the trucking company, the company that helps put freight on a ship, the company that connects everything with technology, the company that audits the freight bills.” It’s not an industry that’s sexy or particularly savvy when it comes to marketing, so that’s the gap that Kara fills. “There just aren’t enough strong B2B marketers to go around, so we’re super sexy to anyone in the space and to venture capitalists investing in the space,” she says. “We are hyper specialists in all things supply chain.”

"I got to do a talk for the YEC women's group, which is great. I think being a woman founder with over a million dollars in revenue puts you in this crazy 2% club."

The company now has 30 employees, and while Kara is going full speed ahead to grow the company, she acknowledges that it hasn’t always been easy. “Going from the Kara Brown show to a company is psychologically very difficult,” she says. And the bigger the company becomes, the more challenging it is to scale the culture, which Kara describes as being characterized by “autonomy and independence.” It’s been doubly tough during the pandemic, with everyone working virtually at a time when the company is growing quickly (60% in 2020 and 68% in 2021). “Even though the supply chain is a mess, most vendors in the supply chain had record years in 2020 and 2021,” says Kara. “So while the consumer is paying more for goods, and shipping is more expensive, my target customer is making a lot of money.”

To build camaraderie among her team in the current virtual environment, Kara has a plan for summer fun. For example, LeadCoverage will rent a lake house, take employees to see The Lumineers, and attend an Atlanta United game. “We’re just trying to keep people connected through fun activities as much as we can,” she says. “But there’s no silver bullet in this mess.”

For her part, Kara values the camaraderie of YEC, especially among its female members. “Any time I can spend time with other women founders who think and act like me — and they’re very rare — there’s hyper value in that for me,” she says. "I got to do a talk for the YEC women's group, which is great. I think being a woman founder with over a million dollars in revenue puts you in this crazy 2% club." Kara adds that she was once fired from being a Girl Scout Cookie mom for “being too intense.” Footnote: she managed to get herself reinstated.