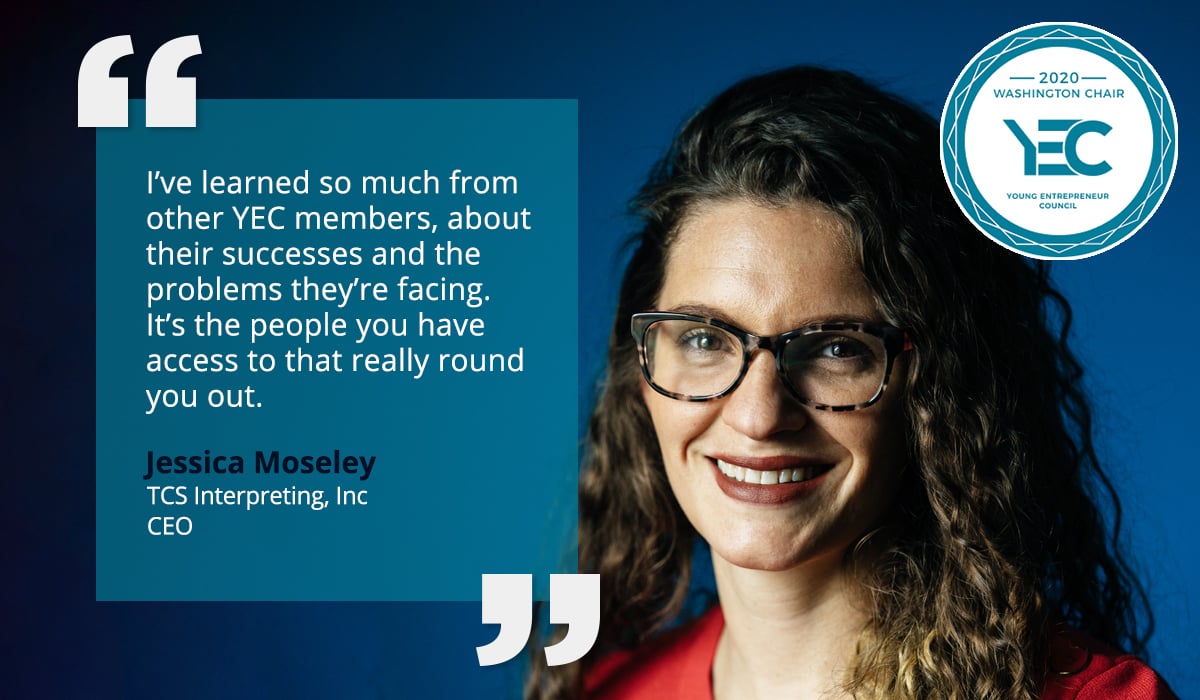 Jessica Moseley, CEO of TCS Interpreting, says YEC was instrumental in “helping me grow as an entrepreneur. I’ve learned so much from other YEC members, about their successes and the problems they’re facing. It’s the people you have access to that really round you out.” YEC, she says, has provided the kind of mentorship she wishes had been available to her 12 years ago, when she first assumed leadership of her parents’ company. “I always want to find a way to give back to organizations that have helped me along the way,” she says. As YEC’s Washington DC chair, she hopes that she can “provide support for people, and that we can grow as a group.”

Jessica was on her way to climbing the corporate ladder as an HR professional when, in 2008, her parents asked for her help in finding a replacement for an employee who had been stealing from them. Back then, TCS was Technical Computer Services, a mom-and-pop computer shop that had expanded into providing technology services and solutions for government employees with disabilities. As it turned out, Jessica decided that she would be the best replacement for the terminated employee.

“Empathy definitely set in, and I didn't want them to go through that experience again,” she says. Her parents, who are both Deaf, had relied upon her for help over the years. She didn’t think she ever wanted to own a business but, she says, “at the same time, I grew up as a mini entrepreneur because I was their ears. I didn't make decisions for them, but I was their voice and I was their interpreter.” American Sign Language, not English, was her first language.

When Jessica joined TCS, it was posting just under $1 million in revenue. Her first goal was to pivot the company and position it for growth as a provider of sign language interpreting services to the government. “I was an interpreter my whole life but I’ve never been a professional,” she says. “So my goal was to hire people who knew more than me, who could be my mentors and help me run and grow the business.” Within two years, the company grew from $800,000 to $3 million in revenue and has continued to grow exponentially. TCS now employs approximately 1200 interpreters.

Because I'm in such a niche market, I’ve learned so much from other entrepreneurs about software, operations, HR, marketing. I have put things out there on the online forum, and I've gotten so much support and help. The access I have to the network is invaluable.

TCS, Jessica says, is essentially a staffing agency, providing interpreters to government agencies on an ad hoc basis, or providing them with full time employees. USAID, for instance, has 15-20 Deaf employees and six full-time TCS interpreters on site. The company also works with the Social Security Administration and FEMA, among other agencies.

After she had been running TCS for three years, Jessica decided to become certified as a professional interpreter. Through continuing education programs, she spent a year and a half educating herself and she now spends 25-30 hours a month interpreting for clients and volunteer organizations.

Like many companies, TCS has been impacted by COVID-19. But while the company’s business is down 25-30%, Jessica says that TCS is actually more profitable now. “We were able to move around our overhead, our utilization went up, we realized we were over-staffing in some areas. So it’s worked out in our favor.”

On the recommendation of a friend, Jessica joined YEC four years ago and “I’ve loved it ever since,” she says. “Because I'm in such a niche market, I’ve learned so much from other entrepreneurs about software, operations, HR, marketing. I have put things out there on the online forum, and I've gotten so much support and help. The access I have to the network is invaluable.” While she initially interacted with YEC members solely through the forum, she says that going to YEC Escape deepened those connections. As chair, she hopes to facilitate similar connections for others. “I want to be able to listen to other members about what drives them as entrepreneurs, what they want to see in YEC, and how I can make a difference for them,” she says.