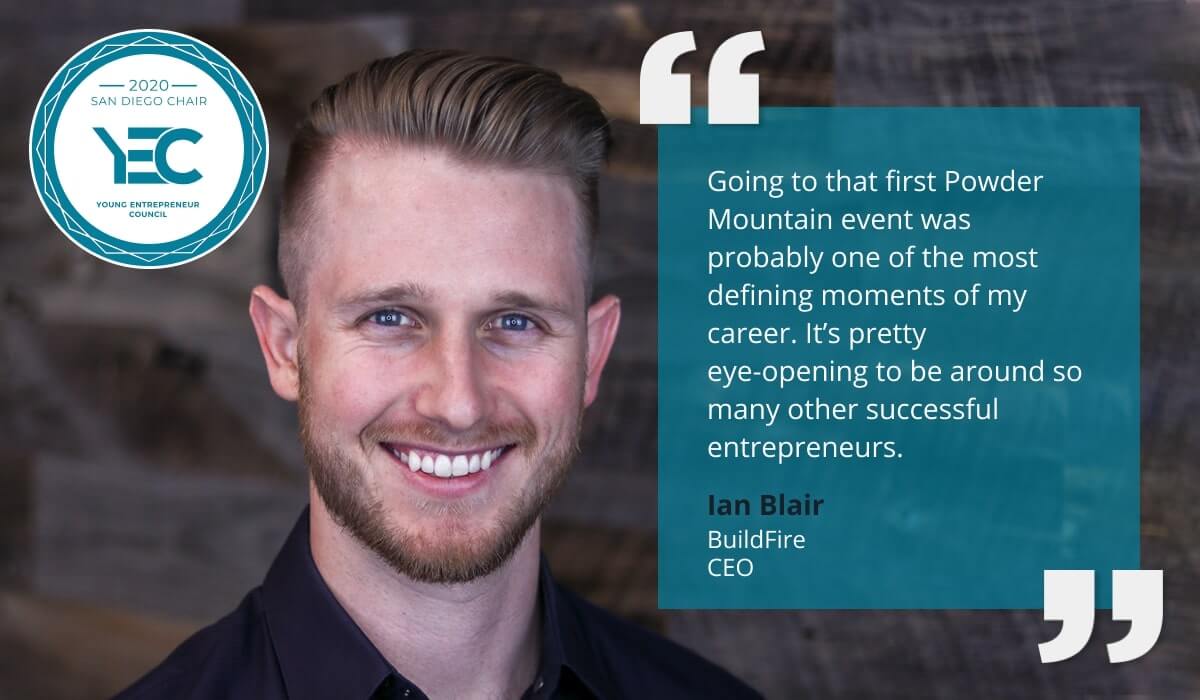 Ian Blair is looking forward to a time when he’ll be able to host “badass events” for YEC members. “If you have the right people and you curate an awesome experience, then magic happens,” he says. As San Diego chair, he’s considering a go-karting event, or perhaps a gathering at an exotic car rally (he’s the proud owner of a McLaren). Until San Diego opens up, he’ll settle for virtual events.

The co-founder and CEO of BuildFire, a mobile app development platform, Ian started his first company when he was still in college. As a sophomore, he was getting paid to build WordPress sites and do online marketing. When the iPhone came out, he became fascinated with the prospect of building and selling apps. “I hired a development in India to build my first mobile app, which was called University Exchange,” he says. “It was for college students to buy and sell textbooks.” But creative marketing got him in a bit of hot water. “I blast emailed the whole school saying the bookstore had closed down and the only way they could buy and sell textbooks was through our app,” he recalls.

Next came Kaleo Apps, founded with Nathan Keating (also his BuildFire co-founder), which white labeled another app development platform. The two targeted churches and other non-profit organizations. “Within a year, we got it to about $25,000 a month in recurring revenue,” says Ian. “And at that point, we started building our own technology to have control over our destiny, and that’s when BuildFire launched.”

“I’ve learned a ton from Eric Siu about SEO and internet marketing,” he says. “And David Henzel told me about the importance of mission, vision, and values, and was a catalyst for me in really learning how to implement that in my own business.”

“We like to think of ourselves as WordPress for mobile apps,” says Ian. Essentially, Buildfire’s platform enables users with limited technical expertise to build and customize apps. There are now more than 300,000 users on the site, and the company offers close to 10,000 free trials a month. ”We have a very broad customer base,” says Ian. “We’ve acquired our fair share of both Fortune 500 companies and entrepreneurs.” The band 311 is a client, as is the City of Lake Havasu. But, says Ian, “the real sweet spot for us has been internal communication apps.” For instance, an employee at a large construction materials manufacturing company recently used BuildFire to build an app to connect remote employees in the field. The project was so successful that the company is now using BuildFire for apps in numerous other subsidiaries. “In the industry, it’s called a citizen developer,” says Ian. “Someone who’s non-technical can use our tools to get something off the ground and once the concept is proven, the company can invest more dollars into making the app serve all their needs.”

Ian joined YEC almost five years ago. “I was interested in YEC from the PR and content side of things,” says Ian. “But then I quickly realized that that was not really why I was there. Going to that first Powder Mountain event was probably one of the most defining moments of my career. It’s pretty eye-opening to be around so many other successful entrepreneurs.” Over the years, he’s come to value the connections and lasting friendships he’s forged, as well as the advice he’s been given. “I’ve learned a ton from Eric Siu about SEO and internet marketing,” he says. “And David Henzel told me about the importance of mission, vision, and values, and was a catalyst for me in really learning how to implement that in my own business.” The connections he’s made in YEC, says Ian, have helped make him a better entrepreneur. “When you upgrade your environment, you ultimately become that environment,” he says.