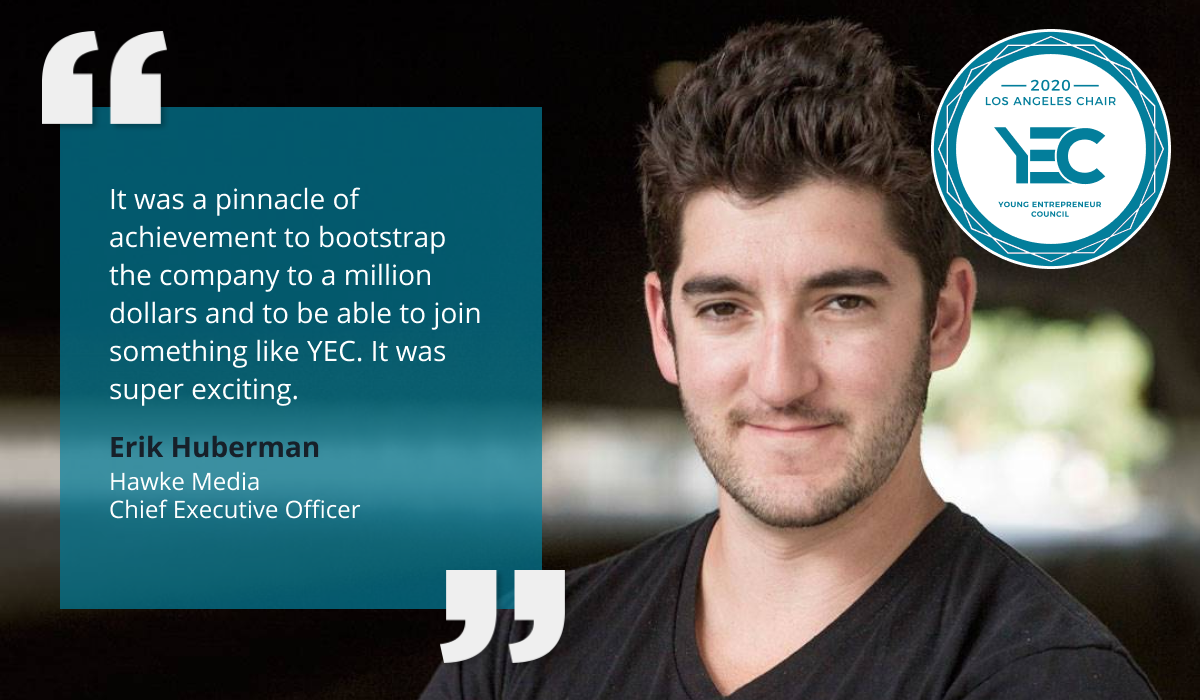 Hawke Media co-founder Erik Huberman joined YEC his first year in business, when he was just about to hit the million-dollar revenue mark. “I had heard about the organization and to me, it was a pinnacle of achievement to bootstrap the company to a million dollars and to be able to join something like YEC,” he says. “It was super exciting.”

That was more than five years ago and, since then, Erik has grown Hawke, an internet marketing company, to 160 full-time employees who have served more than 2,000 clients. “We've had a lot of success taking small businesses and turning them into big businesses through the right type of marketing strategy,” Erik says.

Along the way, YEC members gave him guidance and advice on a variety of business issues, such as sales and business development, and he continues to benefit through ongoing conversations with members who are not only professional connections but friends. The online forum, he says, is particularly valuable because it gives members access to “ongoing conversations among people with different opinions.”

When Erik started Hawke in 2014 with co-founder Tony Delmercado, he was determined to correct the flaws he had perceived in traditional agency models. Rather than insisting on long-term contracts, he offered clients month-to-month contracts and an á la carte menu of services. “The idea was that we could spin up a team that fit their needs,” he says. “And it would be cheaper than hiring in house.” Additionally, he hired full-time employees rather than freelancers and contractors so that he would have control over quality. “Our product is our people,” he says. “We're trying to build something sustainable here by guaranteeing a certain product, and not having them be your product seems crazy to me.”

YEC has given me a lot over the years, so if I can help facilitate [as chair], and make it valuable for myself and the people around me, I think that could be awesome,” Erik says.

While Hawke experienced a COVID-related dip in sales in April, Erik says the company is almost fully recovered. “We worked really hard to fight against any type of real hit and my team did really well,” he says. In April, Hawke hosted Quarantine Conference, an online event for 4,200 people with speakers such as Daymond John. “We came up with the idea right as things started locking down and then launched within three weeks,” says Erik. “And the things we saw coming are what happened, so the event was super helpful.”

Among those insights: a surge in e-commerce; significant  upside for companies that adapt and pivot to online strategies; and ROI for those who continue to invest in creative strategies rather than hunkering down in fear. “This is not the time to tighten your belt and cut everything,” Erik says. “It's a time to lean into it and try to find ways to adapt with how people are acting. Our clients that stuck with us crushed it, and most had record months.”

As for Hawke, Erik says the company, which once housed all of its 160 employees at physical offices in LA, Boston, and New York, is now completely remote. Going forward, he’s thinking about “a new model for the business that is something in between. We may not be going back into our big office spaces. Thankfully, we're built for this. We're super flexible, nimble, and will end up coming through it just fine. As things start to open up again, it's time for us to reassess what our growth strategy is.”

As YEC’s LA chair, Erik will focus on helping members build the kinds of core relationships that have been so valuable to him throughout his membership. “YEC has given me a lot over the years so if I can help facilitate [as chair] and make it valuable for myself and the people around me, I think that could be awesome,” he says.