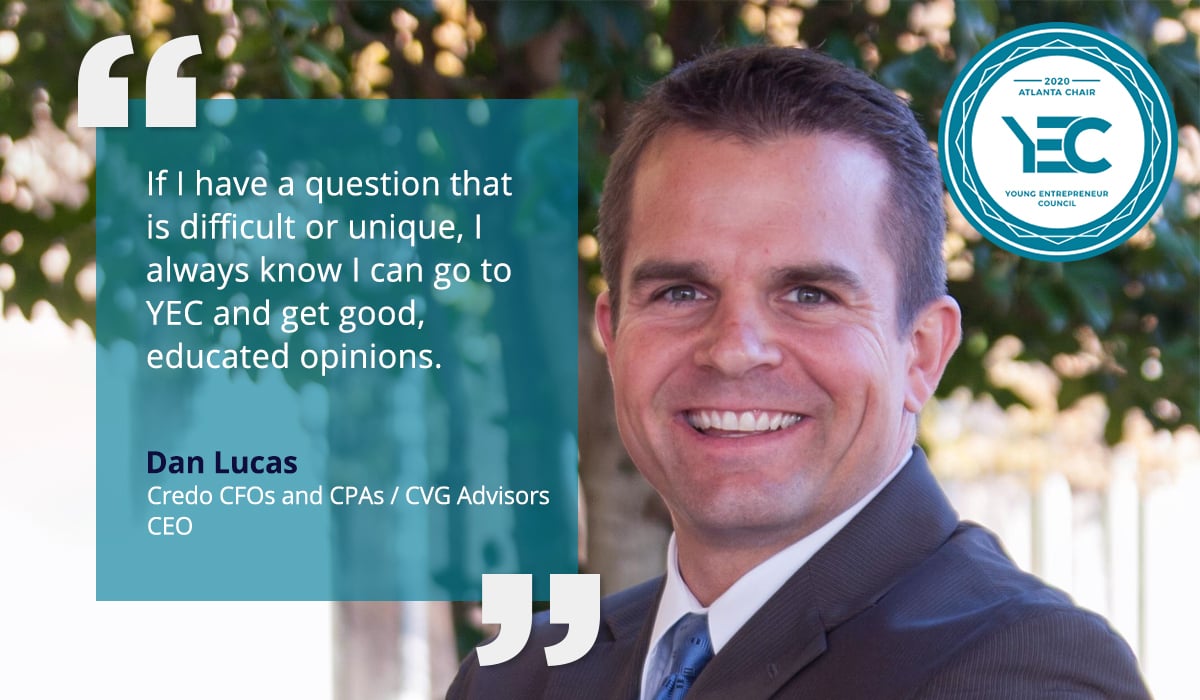 Dan Lucas, founder of both Credo CFOs & CPAs and CVG Advisors, is excited about his new role as YEC Chair in Atlanta because “I love the group, I love the people, and I love sharing knowledge.” As somewhat of a YEC elder statesman, Dan says that he’s particularly passionate about helping younger members who “have the knowledge, skills, and determination, but not necessarily the network. I can give them that, or open that up for them,” he says.&

Dan started his career as a CPA at Arthur Andersen where he did audit and tax work for small businesses. In the late 90s, he was transferred from Chicago to Atlanta to serve the city’s increasing number of small technology startups, many of which would become victims of the dot com bust. “I really didn’t like the structure of the work,” he recalls, “but I enjoyed being part of the companies and the excitement that went with building.” When a client asked him if he’d consider leaving the firm, Dan decided to take the leap, and signed on to oversee the financial elements involved with buying and integrating several companies into a “roll up.” When the roll up was sold to a large publicly-traded company, Dan decided to take some time off and began doing fractional CFO work for a variety of companies. And that’s when he had the “aha” moment that led him to start Credo in 2004.

“I saw a lot of problems with the way that my industry is delivering services, both on the tax and the CFO side,” Dan says. “And I thought I could grow a firm that does things a lot better.” Credo offers its clients outsourced CFO and CPA services, provided by professionals that are trained by Dan and his team to “do more strategy and more value-added type of work.”

He actually hired staff before the business was fully launched. “Anybody can go out and sell services and just hire people as the business grows. For me, it was more putting a model together and saying, ‘I'm going to solve a problem in the marketplace.’”

There’s no “one size fits all” solutions for clients, says Dan. He created what he calls a “CFO blueprint” to identify a business’s specific needs and problems to be solved. “Sometimes they need technology, and sometimes it could be a contract CFO or an employee,” he says.

Dan says that he’s particularly passionate about helping younger members who “have the knowledge, skills, and determination, but not necessarily the network. I can give them that, or open that up for them,” he says.

After more than a decade of working with clients, Dan realized that there was another marketplace need that he might address. “Not a lot of CFOs have experience in raising capital, taking a company public, and managing investors,” he says. “I was having a really hard time recruiting someone who I felt was good and was also having a hard time finding a referral partner so we had to build it. That’s when CVG Advisors was born.”  He took on a partner with a background in investment banking and launched the new firm in 2016.

Dan has been a YEC member for five years and values the community for advice and connections that have benefited his businesses. “If I have a question that is difficult or unique, I always know I can go to YEC and get good, educated opinions,” he says. “Not only can I feel safe about being vulnerable, I know that the answers I get back have credibility.” Several members have helped Dan fill in his knowledge gaps with specific advice on HR issues and marketing. He says that one fellow YEC’er saved him a significant sum of money by advising him against accepting a shady marketing proposal. “YEC is almost like a protective shield,” Dan says.

He also leverages his own expertise on behalf of other members, helping them secure SBA loans, or sharing a spreadsheet tool he created to track PPP (Paycheck Protection Program) spending. As Atlanta chair, he’s “passionate about explaining the value of YEC. If I can give back, develop better relationships, and offer people something of value, that gives me personal satisfaction,” he says.