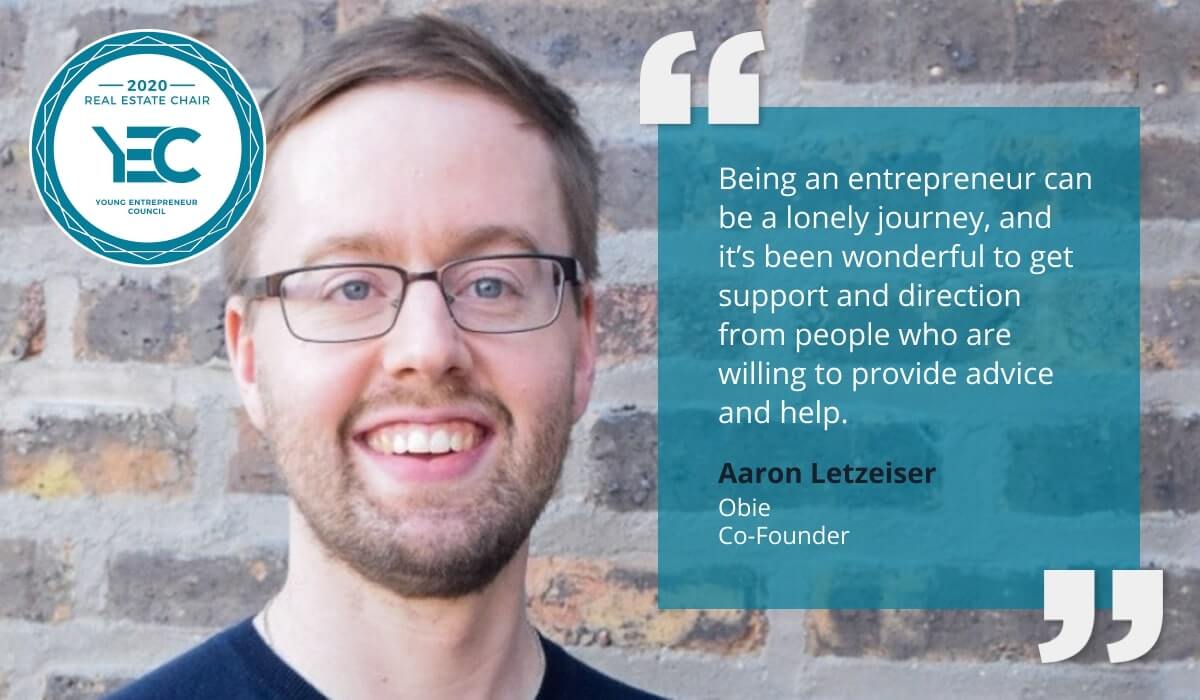 As co-founder of Obie, a real estate technology company, Aaron Letzeiser has always been tuned into real estate-related conversations on the YEC forum. “Whether it's somebody who has some extra cash and is looking to get into real estate, or someone who is thinking of a single-family rental and then slowly growing from there, the forum has been a great sounding board for folks,” says Aaron. Frequently, he says, participants in those conversations have suggested that there ought to be a YEC real estate sub-group. Now there is, and Aaron is its first chair. “I'm really excited about bringing together folks whose day job is real estate with other folks where it's either a hobby for them or they're just getting interested,” says Aaron. “I think that's going to make for really great engagement across the board.” Aaron recently hosted a virtual event for 16 YEC real estate members.

While Aaron and his brother, Ryan, have been involved in the real estate industry for several years as investors and co-founders of Obie, Aaron originally thought his career would take a different tack. While he was still at Michigan State and working in the state legislature, he started an initiative to lobby for a law that would grant intoxicated minors limited legal immunity when they seek help for themselves or others. Aaron, then an aspiring lawyer, helped write the law that was passed in 2012. Rather than apply to law school, he took time off to start Medical Amnesty Initiative, a non-profit that helped get similar laws passed in 42 other states as well.

“I'm really excited about bringing together folks whose day job is real estate with other folks where it's either a hobby for them or they're just getting interested,” says Aaron. “I think that's going to make for really great engagement across the board.”

To finance his non-profit, Aaron started several businesses, including a travel-related company and a distributorship of red Solo® cups. He bought the cups in bulk, resold them on college campuses, and in every sleeve of cups, he stuffed a handful of flyers with information about medical amnesty. “The irony isn’t lost on me,” says Aaron. “But interestingly enough, they become known as medical amnesty cups and I was the medical amnesty kid.”

After a few years spearheading the non-profit, Aaron stepped away from day-to-day management to start Obie with his brother, who had been working in real estate private equity. “We started tossing around ideas of what we could do in the space with software, given that real estate is a massive asset class globally, but really was lacking in technology solutions for the small to medium size owners,” he says. They decided to focus on something that all real estate investors need: insurance.

Obie, says Aaron, is “a tech-forward commercial insurance broker. We make it incredibly easy for folks to save on insurance costs. We usually save people around 16% and get quotes back to people in usually under a day.” Obie’s technology matches real estate investors’ needs with the risk tolerance for each insurance carrier in its database. “We essentially took all of the tasks of a normal insurance broker and automated all of that and built software around it,” says Aaron.

Aaron first discovered YEC in 2015 at an event in Philadelphia. “I just really enjoyed the conversation with other members there,” he says. “Being an entrepreneur can be a lonely journey, and it’s been wonderful to get support and direction from people who are willing to provide advice and help.” Being an entrepreneur, he says, is a lot like trying to find a light switch in a dark room. “There are people in YEC who can help shed a little bit of light in that dark room, and help you find that switch.”