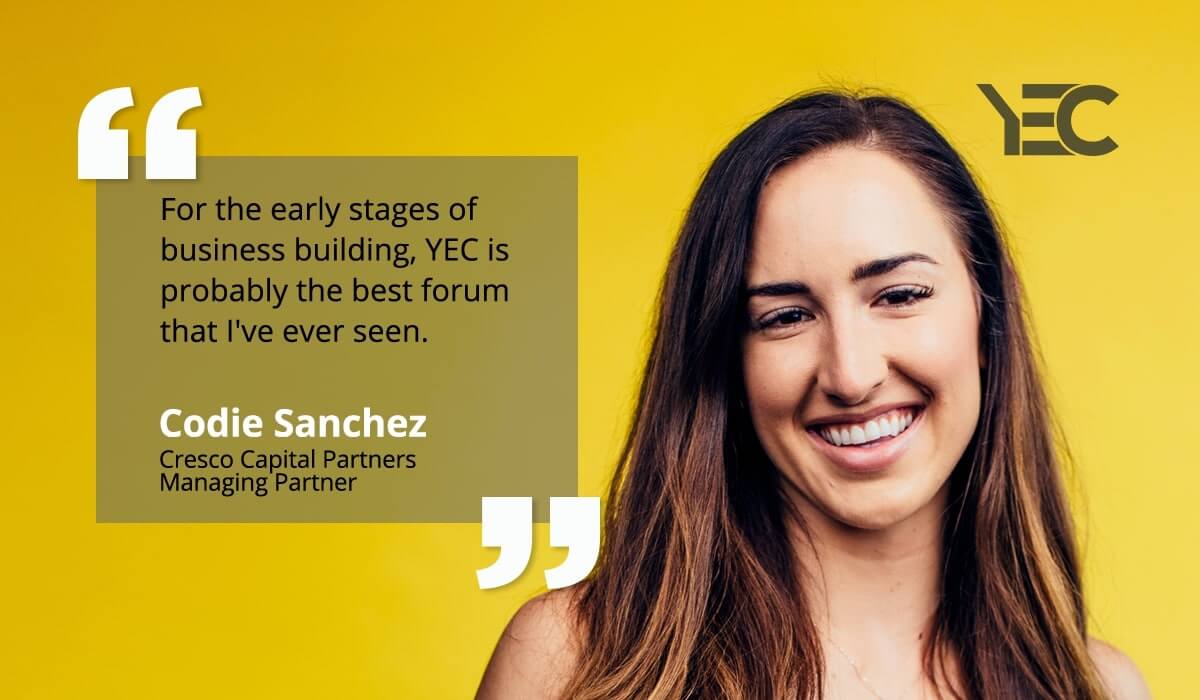 The burgeoning cannabis industry and the investment opportunities it offers, says Codie Sanchez, is “a generational wealth creation event” — an investment trend on par with, say, exchange traded funds and mutual funds. “And I think cannabis will dwarf those two,” she says. “People who get in in a strategic, thoughtful, non-price-speculative way are going to make not only generational money, but define an industry, not dissimilar to what happened in tech or what's happening now in AI.” As a partner at Cresco Capital Partners, one of the first private equity firms focused exclusively on investing in the legalized cannabis space, Sanchez has skin in this game.

Sanchez earned her investment chops at traditional firms such as Goldman Sachs, State Street, and First Trust. While at First Trust, she ran the company’s Latin America and US Offshore Investment Distribution Business. She also started investing in startups. That’s when she first dipped her toes into the cannabis industry. Over the next several years, she became more and more intrigued with the industry and its potential to generate quick and dramatic returns. At Cresco, for instance, seven of the fund’s investments have paid off in two and a half years. So in the spring of 2019, she quit her job at First Trust to become a managing partner at Cresco.

Sanchez’s YEC experience started several years ago when she was angel investing and saw huge value in tapping into YEC’s collective expertise to help address some of the challenges of her portfolio companies. “I met a bunch of YEC’ers at one of the original Summit at Sea events and they mentioned this community of people that help each other solve business issues,” she recalls. So she joined YEC and started tapping the online forum for advice.

Sanchez had invested in a consumer product company called Phat Fudge, a keto paleo performance food, took on the role of temporary COO, and needed to learn about operations and logistics. “I ended up wanting to do an influencer marketing strategy,” she says. “So I worked with a couple of YECers on that, including Phil Laboon, figuring out which platform do we use and how do we incentivize marketers in a way that makes sense.” Her research led her to do business with Ambassador, a YEC company that specializes in referral marketing. She also got valuable advice about selling on Amazon from Kyle Goguen at Pawstruck.

When Sanchez took the leap into the cannabis industry, she continued to tap into YEC, offering members investment opportunities when she was raising money for Cresco’s second fund. “We don't allow that many investors in the fund,” she says. “And so the investors that do come into these funds end up becoming part of the infrastructure of it. So it's actually pretty important for us to figure out who are the right people to get on board, which is why I opened it up to YEC people.” She says that five YEC’ers ended up investing. Sanchez also asked if the group had ideas for cannabis-related companies for Cresco to invest in, and she’s currently considering one referral.

Among the most challenging elements of Sanchez’s new role: due diligence. “I don't think about it as a difficulty because I love it,” she says. “But we've seen about 1600 companies in the cannabis space and we only invest in less than 2% of that.” The company has made 28 investments thus far. Its second fund, which closed in June 2019, raised $60 million and was oversubscribed by $10 million. A third fund, in which the company hopes to raise $200 million, is planned for September 2019.

The cannabis industry, Sanchez says, has tremendous growth potential. Private investors will benefit because institutional investors can’t invest in cannabis as long as it remains federally illegal. That, she says, will give PE firms like Cresco a first mover advantage. “I think this industry will create its own realm of massively successful Fortune 500 companies and investments firms that may very well be the Blackstone or the KKR of this industry.”

But in the meantime, there are plenty of moving parts to navigate and Sanchez knows that YEC will continue to be an invaluable resource. “You’re really only as good as the people that surround you,” she says. “If you're trying to build a company, you need people who are also trying to build a company, and then a couple of people who are a few steps ahead of you, and a couple of people that are a few steps ahead of them. For the early stages of business building, YEC is probably the best forum that I've ever seen.”