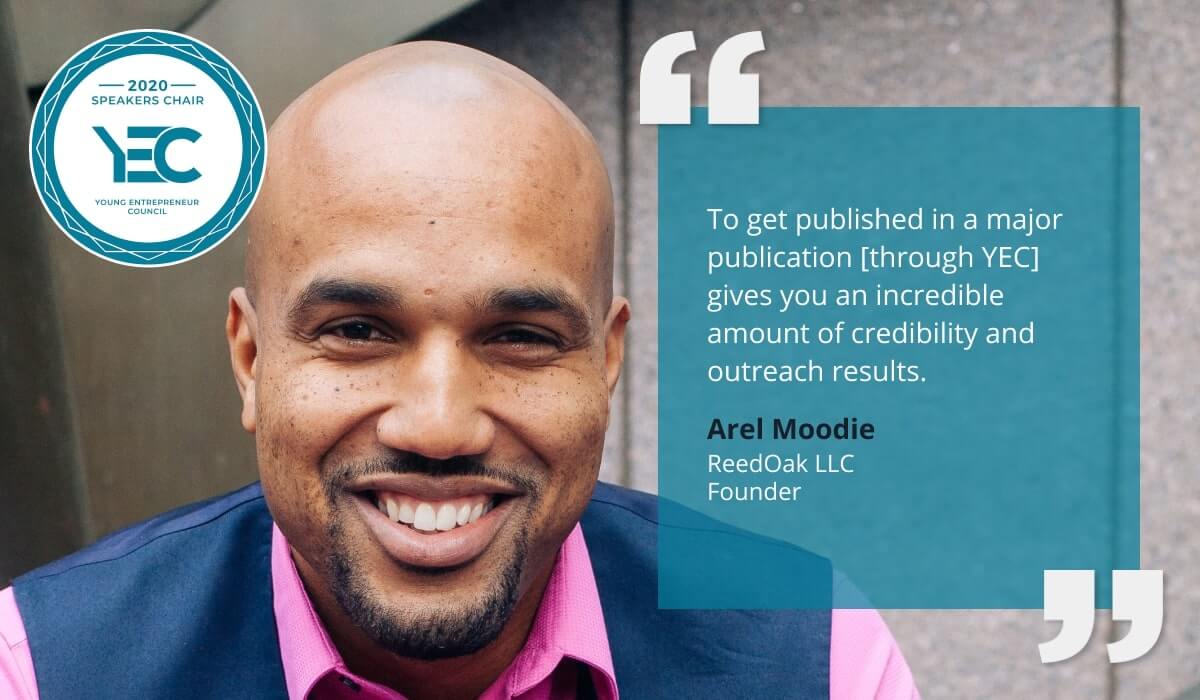 Arel Moodie began his entrepreneurial journey when he was still at Binghamton University, where he co-founded an off-campus housing service that he continued to run after graduation. His mentor suggested that Arel attend as many events as possible to learn and to network. “Most of the speakers were really boring,” he recalls. “But there was this one speaker and he was amazing. He was rocking the stage, he had a great message and he was full of energy.” And just like that, Arel got a glimpse into his future. “Whatever that guy was doing, I wanted to do that,” he says. “I fell in love with it.”

As YEC’s speakers chair, Arel hopes to help members feel as confident and successful on stage as he does. “There’s never been a bigger need for people with good messages and good hearts to get out there and share it,” he says.

Drawing on lessons learned from his own entrepreneurial experience, Arel began his public speaking career in 2007, when he teamed up with Michael Simmons and Sheena Lindahl as a co-creator of Extreme Entrepreneurship Tour, which sponsored events for college and high school students. The three eventually co-founded Empact, which runs entrepreneurial events and programs.

Arel hopes to help members feel as confident and successful on stage as he does. “There’s never been a bigger need for people with good messages and good hearts to get out there and share it,” he says.

A few years later, Arel created his own company called College Success Program. His mission was to draw upon his own upbringing — growing up on welfare in the Brooklyn projects — to inspire low-income youth across the country and drive home the message that “where you start out is not where you have to end.” It was work that he loved and that he still does, although now Arel spends approximately 80% of his time coaching other aspiring speakers. “Most of my clients are CEOs, executives, or business owners who want to build their brand, and get more high-quality clients through speaking,” says Arel.

COVID-19 has changed the public speaking landscape, but not quite in the way you may assume. Yes, there are fewer conferences but, says Arel, “there are more opportunities to speak now than there have ever been before.” Organizations and associations that may have sponsored one big event a year are now doing several smaller online events, sometimes as often as weekly. “Associations are seeing an increase in attendance for these events,” Arel says.

With travel costs eliminated, there are far fewer barriers to attendance, so speakers are still in demand. Speaking fees may be much lower and speakers have to find new ways to engage with audiences who are, more than likely, multi-tasking at home while attending online events. “A percentage of them are going to be washing dishes or folding laundry while the virtual training is on,” says Arel. “You just have to understand the human nature side of it and not run from it, but acknowledge it and have fun with it,” he says.

Arel is a long-time member of YEC who greatly values the advice and connections the group has given him. “When I have a question, I can’t just jump into my general pool of humans and ask, because you’re going to get a lot of feedback from people who have never done the thing before,” he says. “With YEC, I’m going to get a tried and true field answer.” He also appreciates the opportunity to publish thought leadership. “To get published in a major publication [through YEC] gives you an incredible amount of credibility and outreach results,” he says.