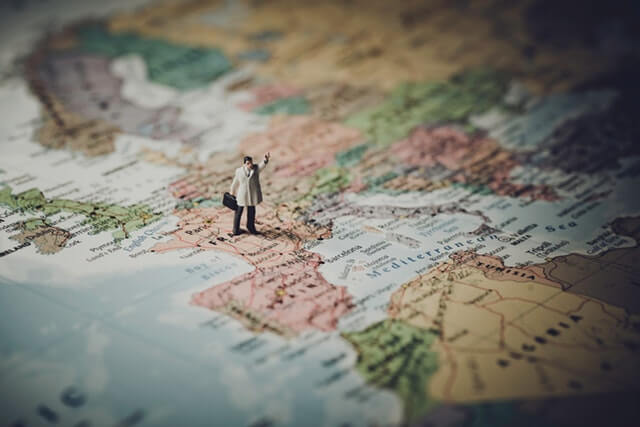 By YEC | Research and Data

Young Entrepreneur Council is packed with the brightest young founders today. They’re starting businesses everywhere — from New York to Nigeria. But where is the best spot for a startup? What influences the choice between this state and that one? How can you decide which major metro area is best for your business — or whether to consider a smaller town?

In this article, we take a look at where YEC members have started their businesses and present some factors aspiring entrepreneurs may want to consider when choosing a locale.

We looked at data for over 1,000 YEC businesses. Of those, 92% were in the United States, and only 8% in other countries. (YEC membership is currently limited to those who live in North America; however, some members have founded businesses in other countries.) Here’s the breakdown of locations by world region: 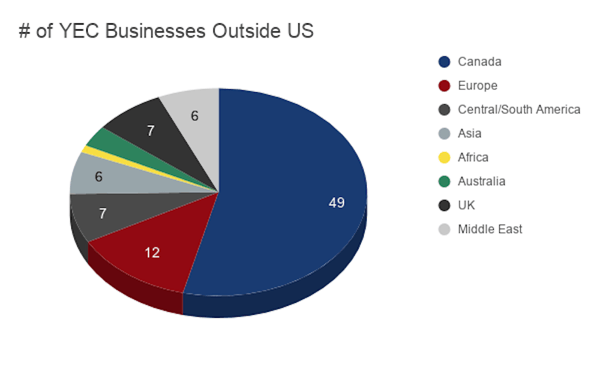 By Region and Division

Due to current membership criteria, the huge majority of YEC companies are in the United States, distributed from coast to coast throughout 44 states. Here we’ve divided them up by region and division, as classified by the US Census Bureau, to get a sense of where businesses are clustered.

In the region chart below, we see the four primary categories into which the Census Bureau divides the country: northeast, midwest, south, and west. YEC members have founded businesses all over, but west (36.5%) and northeast (29.9%) are clearly in the lead. However, the south (21.3%) and the midwest (13.3%) are on the board. 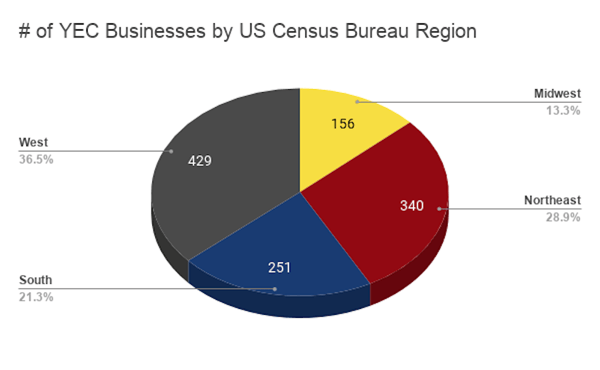 A closer look, considering the nine official divisions, shows that the greatest numbers are in the West: Pacific division (where California sits, with its several very large metro areas) and the Northeast: Middle Atlantic division (where New York City and Philadelphia lie). 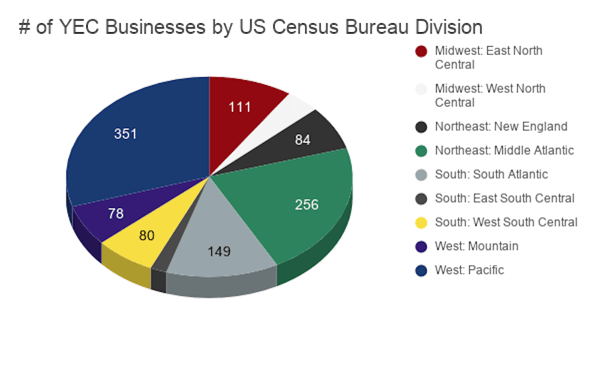 Let’s take an even closer look to determine where the startup hotspots really are.

YEC members have businesses operating in 44 of the 50 US states. The largest numbers are in California (306), New York (210), Texas (67), Massachusetts (67), Illinois (65), and Florida (61). We know YEC’ers are at the top of their fields, running successful businesses in these locations. But are these the best states for a startup?

According to research by FitSmallBusiness, a digital resource for small businesses, only Massachusetts makes the cut. Their top 10 best states for startups are: New Hampshire, Massachusetts, Wyoming, Nebraska, South Dakota, North Dakota, Iowa, Colorado, Utah, and Kansas. The ranking was based on cost of starting a business, taxes, cost of living, labor market, startup activity, access to capital, and quality of life. New Hampshire, for instance, at #1, had the lowest startup cost and best labor market — two YEC businesses are located there.

On the other hand, California, Florida, and Texas ranked lower on the overall list due to the higher costs of living and doing business. However, each of these states contains cities FitSmallBusinesses deemed startup-friendly. So even in an expensive coastal state, an entrepreneur can thrive if they choose the right city.

Major metro areas may be the first locations to come to mind when an entrepreneur considers starting a business. They have large populations from which to draw talent, savvy customer bases, and many convenient resources.

Many YEC members have chosen to found their businesses in these major metro areas. For example, in the state of New York, 202 of 210 YEC businesses sit in the greater New York City area. In California, 253 of 305 YEC businesses are clustered in major population centers. (The largest California contingent was 120 in the greater San Francisco/San Jose area, with 103 in greater Los Angeles and 30 in San Diego.) 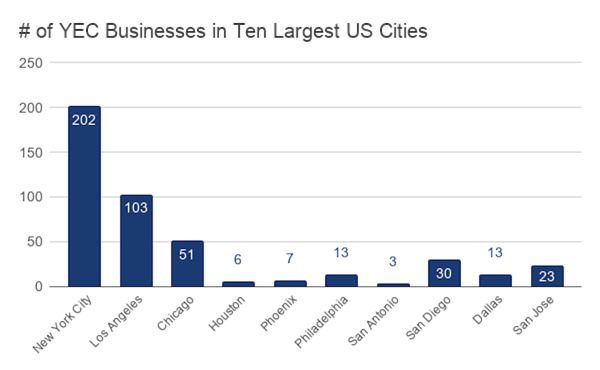 It’s clear that many entrepreneurs are choosing to found their companies in the biggest cities. But some experts (see below) advise not to overlook smaller towns. So what is available outside the big 10?

Perhaps surprisingly, none of the huge major metro areas mentioned above made CNBC’s Top 15 Cities to Start a Business list. Why? The analysis focused on affordable cost of living, low unemployment rates, and workforce availability. Oklahoma City, Salt Lake City, and Charlotte topped the list of recommended cities based on these factors.

Similarly, even on Wallethub’s list of best large cities to start a business, you have to work your way down to #14 to find Miami as a candidate. Wallethub considered factors like growth in revenue, five-year business survival rate, prevalence of investors, office space affordability, and corporate taxes, as well as cost of living. Fortune covered this report as well, concluding that “fly over states” are the places to be right now for startups.

CNBC’s top 15 cities hold a total of 31 YEC companies, with 13 of those in Austin and five in St. Louis. Likewise, in Wallethub’s top 10, YEC members have founded a total of 19 companies (with, again, 13 in Austin, and only six businesses scattered throughout the other nine cities).

Why are well-known major metro areas losing out on these “best of” lists? The thickest common thread seems to be cost of living and working, but that’s just the beginning. Let’s take a look at the factors in play.

Cost of Doing Business/Cost of Living

Cost of living and working must be a primary concern when choosing a location. The business, as well as its employees, must pay for rent, taxes, and insurance. These costs take a large chunk of both personal and corporate budgets, and prices for these necessities vary dramatically based on population density and government policies.

Founders should also consider salary averages for the area; will the company be able to afford the quality of talent it needs? What about supplies and raw materials needed to operate? There are many cost comparison resources available online; see the resources section below for some of them.

Here lies one of the prime reasons founders may gravitate toward large metros. In many cases, they may have the advantage when it comes to population, diversity of industry, presence of universities/college-educated professionals, and availability of startups, incubators, and sources of funding.

However, smaller areas may have thriving growth rates and favorable local laws, in addition to lower costs. It pays to check on all these factors, as well as startup survivability statistics and unemployment rates, before making a decision.

Perhaps the most important factor to consider when choosing a location (and an often overlooked one) is the quality of life an area will offer. Take time to consider what you love, hate, and need in your life before you choose a location. If you’re miserable in cold winters, northern locations are not your best pick; if you can’t live without four seasons, don’t start a business in Florida. If you need to travel often, check the distance to the nearest airport.

Low rent is a fantastic perk, but if you love big city amenities, founding your company in Nowhereville to take advantage of affordability may not be the best choice for you. Likewise, if you are overwhelmed by crowds and love outdoorsy activities, the resources of a large metro area may not present enough of an advantage to justify the necessity of living and working there.

In the end, your location only needs to work for you and your business. What is perfect for another startup may not work for you. Take all relevant factors into account, and make an informed choice that works for you.

Here is a checklist of factors to consider when you’re choosing the location to launch your next business.

Cost of Doing Business/Cost of Living

5 New Year's Resolutions Every Entrepreneur Should Have