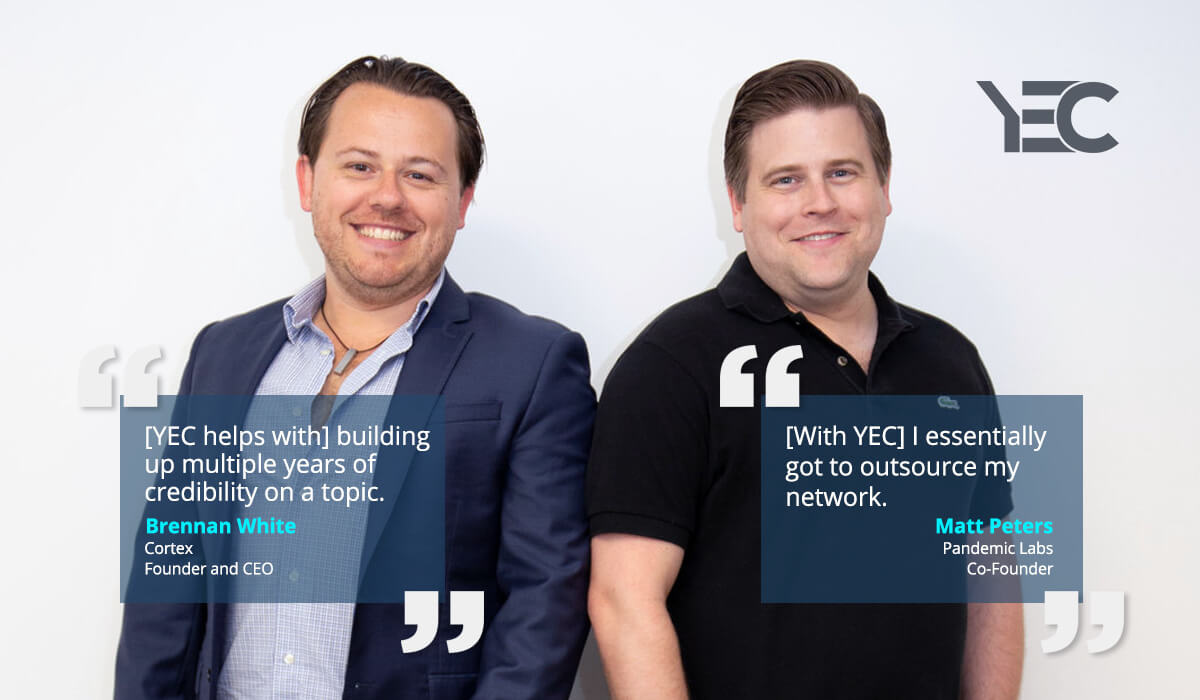 Back in 2007, before smartphones became ubiquitous and when social media was in its infancy, the goal of many marketing campaigns was to “go viral.” Enter Pandemic Labs, co-founded by YEC members Matt Peters and Brennan White as a pioneering social-first digital agency. As an early practitioner of social media marketing, Pandemic Labs established itself as a major player in the industry. Matt and Brennan were early members of YEC. As a hard-driving founder of a startup, Matt says he was always too tired at the end of the day to attend meetups and networking events. “The thing that was really amazing about YEC, and especially helpful for us in the beginning when we had no time, was that all that stuff was curated for us,” Matt says. “I got to outsource my network.” Whenever he received an email from YEC suggesting an event or offering to make an introduction to another founder, he says, “that’s borderline personal assistant-level stuff.” And he knows that when he asks advice from fellow YECer’s “I’m going to take that answer to the bank because I feel pretty good about the source.”

More recently, Brennan has led the charge on a spin-off company, Cortex Automation, an artificial intelligence platform for creative workers at brands and agencies. Instead of creative directors manually deciding which content to create and an army of creators executing on that directive, Cortex uses data to generate content, requiring only a round of edits and approval from marketing leads. By automating that process, Brennan says, “we save a ton of time and we make sure that every choice, every piece of content, every topic, is based on what the most available real-time data suggests.” Though a content creator himself, Brennan has leaned on YEC to help with his own visibility goals through publishing with YEC’s media partners. “YEC has connections already, has the prompts ready, makes [getting published] super easy,” White explains.  “Now that I have five, six years of examples of being quoted and focused on in the press, I can go get more earned media. I’m not an unknown entity… it’s building up multiple years of credibility on a topic that people are looking for when they want someone to chime in on a topic — in my case, AI."