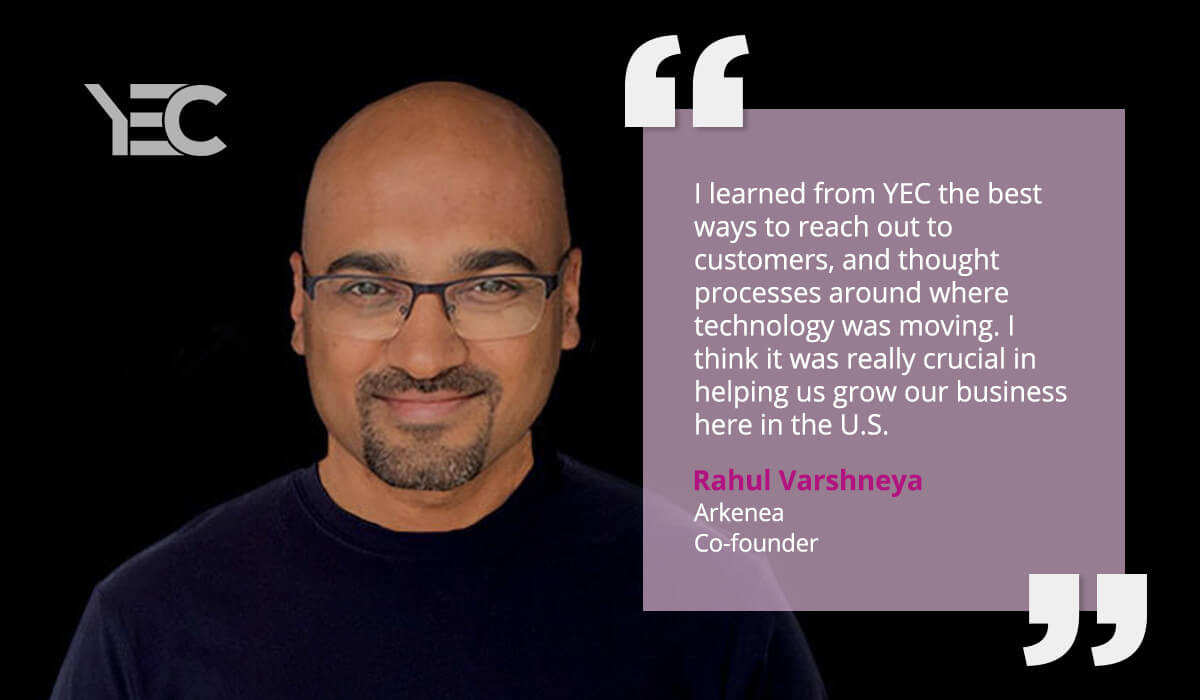 Rahul Varshneya taught himself to code on a computer that his parents bought for him, and he started his first company during the first year of his undergraduate studies. That was more than twenty years ago, and he has been starting and growing technology companies ever since. His ventures run the gamut. He’s launched a hyper-local portal that helped consumers discover new products, a fine arts investment advisory firm, and an e-learning company, among others. His experience as both a skilled technologist and an entrepreneur put him in a unique position to co-found his current company, Arkenea, a custom software developer.

“Our customers come to us with their requirements for a platform they want to build out,” says Rahul. “It could be either technology itself or an existing business that needs technology to scale.” Rahul thinks he brings additional value to clients because he has been through the experience of founding companies and building technology that enables growth. “We’ve gone through the journey ourselves and understanding what the pitfalls are, and that separates us from almost every other dev shop,” he says. While Arkenea does work with large companies occasionally, the bulk of its customers are smaller, founder-driven companies. “We help them build SaaS, e-commerce, core applications, along with AI and machine learning,” Rahul says. “It’s always custom development from the ground up.”

"[YEC has] helped us get a lot of PR and outreach for our brands,” Rahul says. “Over time, I grew my own connections with publications, but YEC played a very instrumental role in helping me get to that state. The value has been incredible."

Rahul has also co-founded two additional companies, CurveBreak and Benchpoint — Arkenea spinoffs that grew out of the company’s own internal needs. As part of an effort to build a brand identity and generate leads, Arkenea started an in-house content marketing and SEO initiative. “Clients started to reach out and say, ‘you’re doing this really well, can you help us out?’” says Rahul. “So we began helping them with content marketing and SEO and we then decided to launch a separate agency. That’s when CurveBreak was born.” Likewise, Benchpoint emerged from Arkenea’s need for more economical and start-up appropriate pipeline management software. “We felt we were paying far too much to use too few features,” he says. So the company built its own sales CRM and pipeline management software and now markets the product to other startups and small businesses via its spinoff, Benchpoint. “We’re finding our niche for that product,” says Rahul. “It’s [at a] very early stage.”

Arkenea currently has a staff of 40 people, all of whom are in India, along with Rahul’s co-founder, Karthik Krishnaraj. Rahul is based in Raleigh, NC, which is where CurveBreak is located. However, when he first started Arkenea nine years ago, he, too, was situated in India. That’s when fellow YEC’er Neil Patel suggested that Rahul join the group. “He said I’d find a lot of peers and like-minded people to share insights and advice,” Rahul recalls. “Networks aren’t automatic. You either have to get out there and build one organically or be part of an organization.” He opted for the latter and became a YEC member.

In those early days, when he was still based in India, Rahul says being part of YEC and connecting with peers on the online forum was invaluable. “Ninety-five percent of our business is in the U.S.,” says Rahul. “So one of the biggest learnings was cultural differences. The way business is done in India versus the U.S. is completely different. You just cannot have the same kind of conversations or dealings.” He relied upon YEC members to help guide him. “I learned from YEC the best ways to reach out to customers and thought processes around where technology was moving. Those are things that helped us build a company for the future. I think it was really crucial in helping us grow our business here in the U.S.”

While his company is now beyond the startup stage, Rahul still derives value from YEC. “It’s helped us get a lot of PR and outreach for our brands,” he says. “Over time, I grew my own connections with publications, but YEC played a very instrumental role in helping me get to that state. The value has been incredible.”