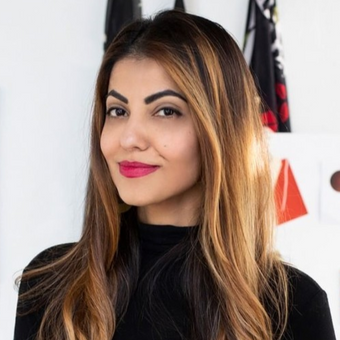 Umaimah is the Founder and CEO of VIDA, a global platform that connects creatives and producers from around the world to produce and sell original, quality products - at scale. Prior to founding VIDA, Umaimah was a Director at West, where she led product strategy for some of the most promising pre-IPO tech startups. She spearheaded West’s early-stage business unit and served as the loaned VP of Product for a consumer wearable initiative. Previously, Umaimah was Director of Product in Microsoft’s Startup Business Group where she led the division’s efforts around incubation on Xbox Kinect. Umaimah has managed P&L for a $60M business, which she increased sales for by over 2x. She has launched new consumer businesses and led growth from zero to millions of users. She holds 13 Patent Awards in media and entertainment. Umaimah is also the Founder of thedreamfly.org, a global initiative connecting communities in conflict around common causes with presence across four countries touching over 5,000 lives. dreamfly kickstarts seed initiatives that are 100% financially sustainable within one year. Umaimah has spoken at two TEDx events and multiple panels on Entrepreneurship, Social Enterprise, and Marketing. She has written several Forbes.com Op-Ed pieces, Harvard Business School case studies, and the opening chapter for the hardcover, Passion & Purpose. Umaimah has an MBA from Harvard Business School, where she was a Baker Scholar, and a BSc from Cornell University in Human Development with coursework in Computer Science.

Data can tell a business owner a lot about the decisions they should be making or the paths they should be following if they want to grow their business. However, with so many metrics to keep track of and so many variables at play at all times, understanding exactly what data to collect and what to do with it can be confusing, especially for new or inexperienced entrepreneurs.

Becoming an overnight success is every entrepreneur's dream, but when it actually does happen, it can rapidly turn into an overwhelming nightmare if you aren’t prepared for the influx of new customers and orders. Rather than allowing yourself to be buried by the consequences of your success, finding a way to scale your business quickly can ensure you keep up with rising demand.

Is Growth Becoming The Enemy Of Growth?

Despite companies’ increasing consciousness and desire to attract and motivate the best talent, employees today are feeling more and more disenfranchised.

How Do We Get More Than 1% Of Us Solving The Most Complex Challenges Of Our Time?

Let's look at what can change, how it can happen and how you might be able to contribute to it.

What Questions Does The Most Important Crisis Of Our Lifetime Raise For Us As Business Leaders?

If we dig deep into the history and origin of societal inequities, what glares back at us, in the simplest terms, is the quest for money and power.

Eight Things Every Founder Ought To Do In Their Downtime

During downtime, busy entrepreneurs should seek to relax and unwind. However, if you're the kind of driven professional who has a hard time disconnecting from work, you’ll most likely be looking at ways to fill your downtime that are relaxing yet productive.

One League is a global education institution connecting the world's highest potential talent with the world's best opportunities by offering an Ivy League quality education, irrespective of financial means.