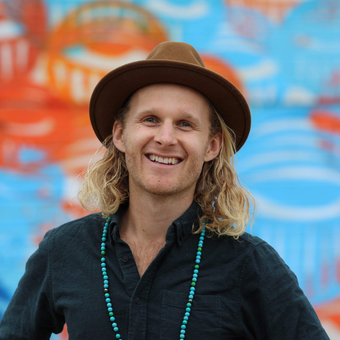 As a sought-after speaker, event facilitator and executive coach, Finnian has been dubbed “the Business Mystic” because of his unique ability to put consciousness into business and inspire leaders to find new levels of meaning and purpose through their creative endeavours. This approach flowed through his term as President of the Colorado Chapter of Entrepreneurs Organization (EO) - the largest and most influential community of entrepreneurs in the world. Finnian helps people ‘love their path’ so they can feel content with a life lived in the now. As an entrepreneur, Finnian built and exited two multi-million dollar companies in the financial industry. He’s the Creator and Chief Visionary Officer of Intentionality.com. Through the four paths of the Intentionality framework, Finnian guides people to be purposeful and aligned in their belief, thoughts and behaviors so they can feel more love in their life. As a lifelong learner, Finnian has degrees in maths, physics, finance, leadership, teaching and a master’s degree of science in positive psychology. He spent 7 years in the Australian Defence Force and graduated from one of the most prestigious leadership organisations in the World, The Royal Military College of Duntroon. Finnian makes appearances as a financial expert and is on a mission to bridge the gap between money and spirituality. He's appeared on Sky Business, on ABC as a political commentator, and on Ten’s morning shows as a financial expert. He also regularly appears as a guest writer for online publications - Money Management, Smart Company, Business Insider, Forbes and more. Finnian's finest accomplishment to date was being featured on the popular National Geographic Documentary, Undercover Angel. This was a project where he was dropped into an underprivileged community to find out their core issues, build trust and come up with a project that would support their needs. He funded the entire program himself and worked with community leaders to form a family education center in Fakulteta, Bulgaria. Above all, Finnian is a conscious being - committed to embodying Intentionality and inspiring others to do the same. Finnian travels the world spreading Intentionality on speaking tours, exploring new places and cultures and chasing powder as a ridiculously passionate skier!

Intentionality Secrets For Creating Exponential Outcomes In Your Business, Health And Relationships

If more time isn’t the solution to a successful and fulfilling life, what is? The answer is your energy — a force with an exponential impact on your achievements and the life you create.

Intentionality combines ancient wisdom and time proven technologies with modern day science to show you that a life of Intentionality will lead to more love and joy in your life! With the Intentionality lifestyle, you will you increase your levels of oxytocin and serotonin so that you feel more love and joy in your life. What we are all really desiring out of life is to feel a particular way. Unfortunately the decision making process that we use to try to bring more love and joy in our life is flawed. This is why even though we have more materialistic objects and a better quality of life than ever before, our rates of depression, dissatisfaction and even suicide are increasing drastically. We are approaching everything from the wrong way. Love and joy come from a way of life, not an end outcome destination or achievement. Intentionality provides the entryway into this way of life. We are creators of our own reality. Intentionality is your way to get back to creating and living in a reality that you love and brings you joy as you create your path, get on your path and stay on your path.