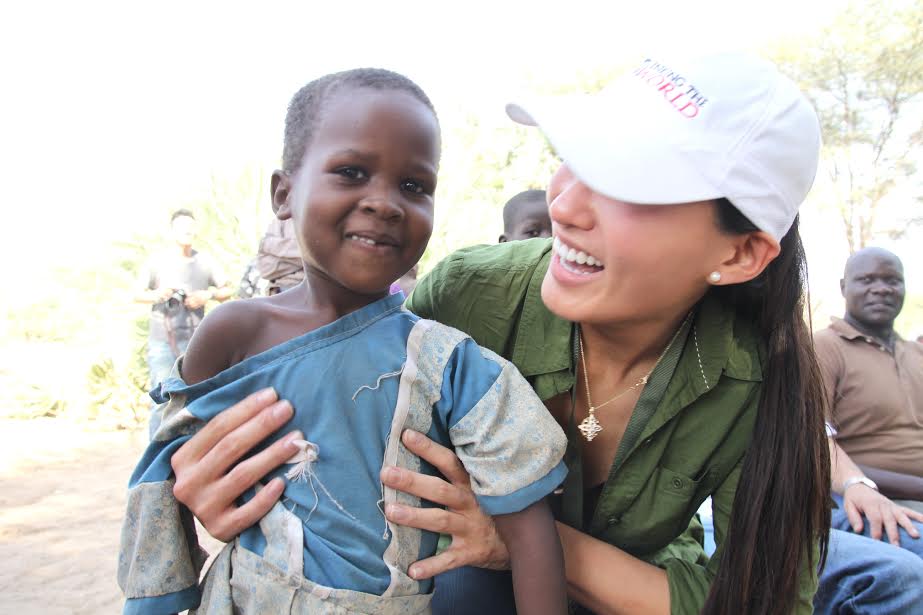 “Haiti was an absolute disaster that no one expected. No one was prepared for it, and when we hit boots-on-the-ground within a week of the earthquake hitting, there was absolutely no coordination or collaboration among NGOs, first responders, local municipalities, locals. It was just utter chaos,” remembers Mina Chang.

Where others would be frustrated, Chang — CEO and President of Linking the World International — was the perfect candidate to make sense of the chaos. The daughter of two Salvation Army officers, Chang spent her childhood helping others around the world. However, a discerning eye and out-of-the-box ingenuity lead her to disrupt this model even as she started working within it. For disaster situations like Haiti, she knew there was a better way to coordinate efforts and effectively use all potential resources.

Focused on breaking cycles of poverty by offering humanitarian aid, empowering communities and advancing empathy, Linking the World is not your average NGO. Their methods are unique: forward-thinking partnerships that maximize the effectiveness of both parties, and innovative programs designed to render their own company’s presence obsolete.

“The old models that are created by charities and donors have put pressure on organizations to raise and spend money to ensure the continuation of projects that ultimately grow, but may not be necessarily needed. A lot of charities are funding these programs just to be sustained as organizations, with programs that aren’t really even needed or effective but are sexy to a donor,” explains Chang.

After some early success as a recording artist and pop star in Korea — which lead her to become an ambassador for the organization she now heads — for Chang, this line of work is not about growing a sexy organization, but rather about building an effective one. “The inherent decency of an organization shouldn’t absolve it from scrutiny,” she says. For her, how an organization treats those it helps and the lasting impact it has on communities are paramount. No savior complex. No vanity metrics. And no growing dependence on foreign aid.

After seeing devastated communities like the ones in Haiti and the Philippines fail to receive much-needed aid due to lack of coordination among NGOs (and then become stuck in cycles of dependence once nonprofits began their work), Chang looked for ways to improve the system. Although she initially met with resistance, she reworked Linking the World from within after taking over leadership in 2011, focusing her efforts on building robust partnerships that played to each agent’s strengths in order to improve the overall functioning of disaster response and humanitarian aid.

Some of these partnerships — such as with the Department of Defense — can seem controversial, but Chang stands behind them.

“We bring value by not being afraid to explore civil-military operations. There are large, wonderful, huge organizations out there that will never ever go near or talk to the military because of their stance on neutrality. NGOs have the same neutrality but we, as an organization, are looking at ways to make this work because we’ve seen the value in these kinds of partnership.”

When responding to the crisis in Haiti after the earthquake, it was Linking the World’s partnership with the DOD called Operation Unified Response that allowed them to deliver aid quickly.

“Airports were shut down, so NGOs couldn’t get planes. We had to fly them through the Dominican Republic and drive three hours across the border. But we had created a partnership with the Department of Defense to give us access to hitch rides, and to be able to get our goods onto some of their planes. And they also helped us with our convoys to clear roads and to get our materials to the areas that we were focused on,” says Chang.

Linking the World now partners with the U.S. Navy to distribute materials and medical supplies through a program called Operation Handclasp. They’ve also pioneered the use of drones and UAVs (unmanned aerial vehicles) for disaster response with their Help and Locate Operations (HALO) program. HALO uses sophisticated UAVs to map infrastructure problems in disaster zones, provide valuable imagery in real time, pinpoint where there are needs and generally help coordinate relief efforts.

The precipitating issue: in Haiti, Linking the World had maps from OCHA (Office for the Coordination of Humanitarian Affairs) indicating the locations of various mobile medical clinics and NGOs. But when arriving on site they would find that no one else had made it yet, because the others had been forced to reroute due to a downed bridge.

But Chang knew that the military and even the media had this valuable imagery through their drones. By incorporating this new technology, Linking the World improved their disaster response abilities as well as the level of aid they’re able to provide.

Focusing on collaboration and community

“I spent my entire life in this work of aid and disaster in conflict zones, and every disaster I worked in from the tsunami in Asia, to the earthquake in Haiti, to the typhoon in the Philippines, I saw crucial time, donor dollars and life being lost and wasted because of the lack of coordination among first responders,” says Chang.

Where traditional NGOs often refuse to share resources and information out of fear of losing brand positioning and donor dollars, Mina pushed the boundaries and built something new: an updated model of social good centered around collaboration and partnership. And not just with other large, international organizations.

“We have to collaborate,” she says. “We must partner with local municipalities, local government, local churches, local schools; we want everyone to have skin in the game. We want everyone to be reinvested into their own communities.

It’s not enough — and not a good idea — to go into communities and focus only on your own operations. If you’re only trying to increase the level of aid you provide, you’re liable to trap a community in a cycle of dependence. Instead, source talent and resources locally and build an invested community. A good example of this idea in action is the organization’s work with a fishing village in Haiti.

Says Chang, “We have a cooperative where a certain percentage goes back into a reserve for the most vulnerable in the community, like a family that’s caring for orphans or the elderly. This includes some of the fish. But then a certain percentage of all the money that’s made from the sale of the fish will go back to building this cooperative, that will [in turn] help train young fishermen in the village and young women that are buying and selling these fish.

“We don’t want to be an organization that runs around putting Band-Aids on problems while issues fester, which hurts the very people that we’re here to serve,” she says. Linking the World is laser-focused on sustainability, not patching together temporary solutions.

Chang also takes a different approach to measuring impact. She says, “We like to measure our success by how quickly we can get out of an area, out of a community, rather than grow and scale our presence.” They also monitor United Nations Developmental Goals such as infant mortality rate, local economics and the business opportunities that are now present. Success comes from empowering local leadership and creating a community that can prosper on its own.

They’ve seen their results first-hand. “We already had two schools down in Haiti, and so when we responded to the earthquake we went immediately to helping the community and the school. And it was amazing because the first responders to our school were the kids that are now adults that had aged out of the schools or the orphanage.”

Although a business needs to scale in order to grow, Chang insists on effectiveness over pure growth. It’s important to create a sustainable community as well as a sustainable organization or program.

Playing to your strengths

But not everyone has Chang’s background and aptitude for on-the-ground work. Despite the current trendiness of social initiatives, and the authentic desire of many entrepreneurs to do good, too many dollars and resources are poured into only partially effective programs.

“Billions of dollars get wasted from well-intentioned leaders that say, ‘I want to start my own charity.’” This is because starting a charity comes with its own set of challenges, and the rules of starting and running a business are different than those of a nonprofit. For example, raising funding and gathering donations don’t work the same way. Chang’s suggestion for the altruistic?

There’s also a role for businesses to play, and entrepreneurs who want to maximize their effective giving or professional social initiatives. Rather than trying to build new programs into existing business models, potentially distracting from core goals and competencies, Chang suggests playing to your strengths: do what you’re good at, and find a partner to support.

Finally, Chang cautions entrepreneurs to avoid doing any sort of social program just for the PR benefits. “Good intentions are simply not enough,” she says. “Know that if you’re in it to make money then that’s great — be in it and make lots of money and become so wildly successful that you can partner with an organization and help with the technology assets or with process, whatever it is that you do well; partner with an organization and make them better rather than trying to leverage a feel-good factor thinking that it’s going to attract more customers.”

For those whose strengths lie in other areas but whose hearts are in a similar place, she has a few words of wisdom.

“Extreme poverty globally can’t be addressed just by charities alone: We have to partner with businesses. And we have to work together and leverage all of our resources and our reach in order to make a difference. If you’re an entrepreneur — after addressing an issue that’s passionate to you, your family, your staff and your customer base — if you can identify that and you partner with an organization that also addresses that same issue, then that’s a true public/private partnership that can really have an impact.”

All images courtesy of Abigail Chang and Paul Chang. This feature originally appeared in YEC Quarterly, a print magazine for YEC members.

Pitching an Investor With Codie Sanchez

Ask an Entrepreneur: How can I prepare for disruption in my industry?